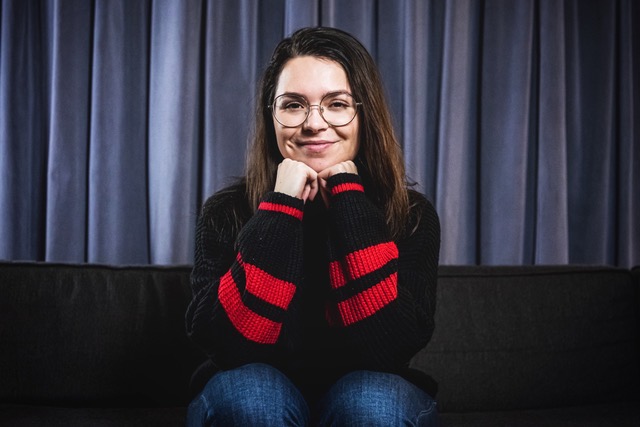 In the spring of 2019, I took the NUVention: Arts class through the Farley Center for Entrepreneurship and Innovation with Gregg Latterman. For those who don’t know Gregg, he has a long history in the music industry, having founded Aware Records in 1993 and launching the careers of John Mayer, Mat Kearney, The Fray, Brandi Carlile, Five for Fighting, and many more.

Over the course of the quarter, we were tasked with creating startups in service of practicing the entrepreneurial process. Through market research, discovering our product-market fit, and completing a competitive analysis, my team and I developed TRID – which was essentially Stitch Fix for LGBTQ+ folks (Some of my teammates continued to develop TRID and went on to win 1st place at the 2020 Hackout!). I noticed that Gregg spent most of class time focusing on the importance of paying attention to industry disruptors and building your network. Every class would involve either a deep dive into the entertainment industry where we would analyze the companies that failed to adapt to the digital age, or listen to guest speakers from Gregg’s personal network like Mat Kearney and PJ Loughran. By the end of the class, I left with these three takeaways: adapting to disruptors quickly is critical, knowing your audience is king, and nurturing an authentic connection is imperative to mobilizing your network.

Flash forward to 2020, I started working with Gregg when he began managing the piano-driven, contemporary pop artist Ben Rector. Boasting over 3 million monthly listeners on Spotify, Ben likes to joke that he is the most famous person no one has ever heard of. What makes Ben’s artistry unique is that it’s supplemented with his experience in the volatile world of entrepreneurship. He has been an entrepreneur his whole career, successfully building his fan base from scratch and founding his own record label, Ok Kid Recordings. He has never signed to a major label and has been successful on all levels, earning himself the title of the biggest independent singer-songwriter of his generation.

It is no secret that the COVID-19 pandemic has flipped the entertainment industry on its head. Ben’s entrepreneurial mindset proved to be his biggest asset in the face of the chaos brought by 2020. Working with Ben’s team has provided me the opportunity to apply the lessons I learned in the classroom to the post-COVID music industry. Here are my takeaways:

1. Adapting to disruption is critical.

Touring has been a primary source of growing one’s fanbase for decades. Suddenly, COVID has created an environment where that avenue for growth is no longer an option. Many musicians have decided to cancel their tours and wait it out, but we knew that wouldn’t be an option for Ben. We knew it was crucial to adapt and find new means of engaging and providing value to his fans. Our solution was Ben’s first official livestream event on September 20th. With a professional studio and setlist from his cancelled “Old Friends Acoustic” Tour, Ben pivoted to streaming his content to engage with his fans safely.

2. Knowing your audience is king.

For the first time, families nationwide are being forced to be apart during the holidays. With a pulse on his audience, Ben understood the challenges his fans were experiencing this holiday season, so he created music that would bring families together during the holidays, even though they couldn’t be together in person. This was the inspiration behind “The Thanksgiving Song,” which is on course to becoming a holiday classic. Ben has always made it a goal to make quality content that delivers his audience what they need most and that means everything, especially at a time like this.

3. Nurture an authentic connection, so you can mobilize your network.

Another key similarity between the worlds of entrepreneurship and music, is the vital role that relationship-building plays. “Networking” is a buzz term, but genuine relationship building can be mutually beneficial and pay off in dividends. Ben’s success can largely be attributed to the responsiveness of his fan base. An active and engaged community is derived from trust between the artist and their audience. Because of the authentic connection he has fostered with his supporters, when Ben asks his fans to do something, they do it.

In May, he released a quarantine-inspired single called “It Would Be You” and launched a dance challenge across social media platforms called the Coffee Dad Shuffle Challenge. Fans were tasked with filming videos of them dancing to “It Would Be You” in their robes and slippers. Ben was pleasantly surprised to see how much his fans enjoyed the contest. He was so overwhelmed with the response; he even made a fan compilation music video. Ben was able to mobilize his network because he created a win-win scenario that positively engaged them. All in all, Ben has shown me that the best relationships aren’t contrived, but instead, built with trust over time. That authentic connection enables him to mobilize his network when he needs it most.

Now that Ben has officially become the “Mariah Carey of Thanksgiving,” our next challenge is to build excitement around his Holiday livestream coming up on December 20th, featuring his new Christmas album “A Ben Rector Christmas.”

Ben’s career continues to serve as an inspiration to me, and hopefully for all artists who seek to be independent musicians. If one thing is for sure, 2020 has put all our entrepreneurial skills to the test. It’s a stark reminder that all industries are subject to disruption and change, but adaptability and collaboration can carry an artist, brand, or business, through the most uncertain of times.

Olivia is a senior at Northwestern, majoring in Learning and Organizational Change. In 2018, she founded The Artists in Residence Program, an artist incubator at The Garage designed to foster a strong artist community and teach students how to transform their passions into a business. She participated as a founder in the 2018 Wildfire Program and is an ambassador for the Propel Program. She looks forward to moving to Nashville and continuing to pursue a career at the intersection of arts & entrepreneurship.