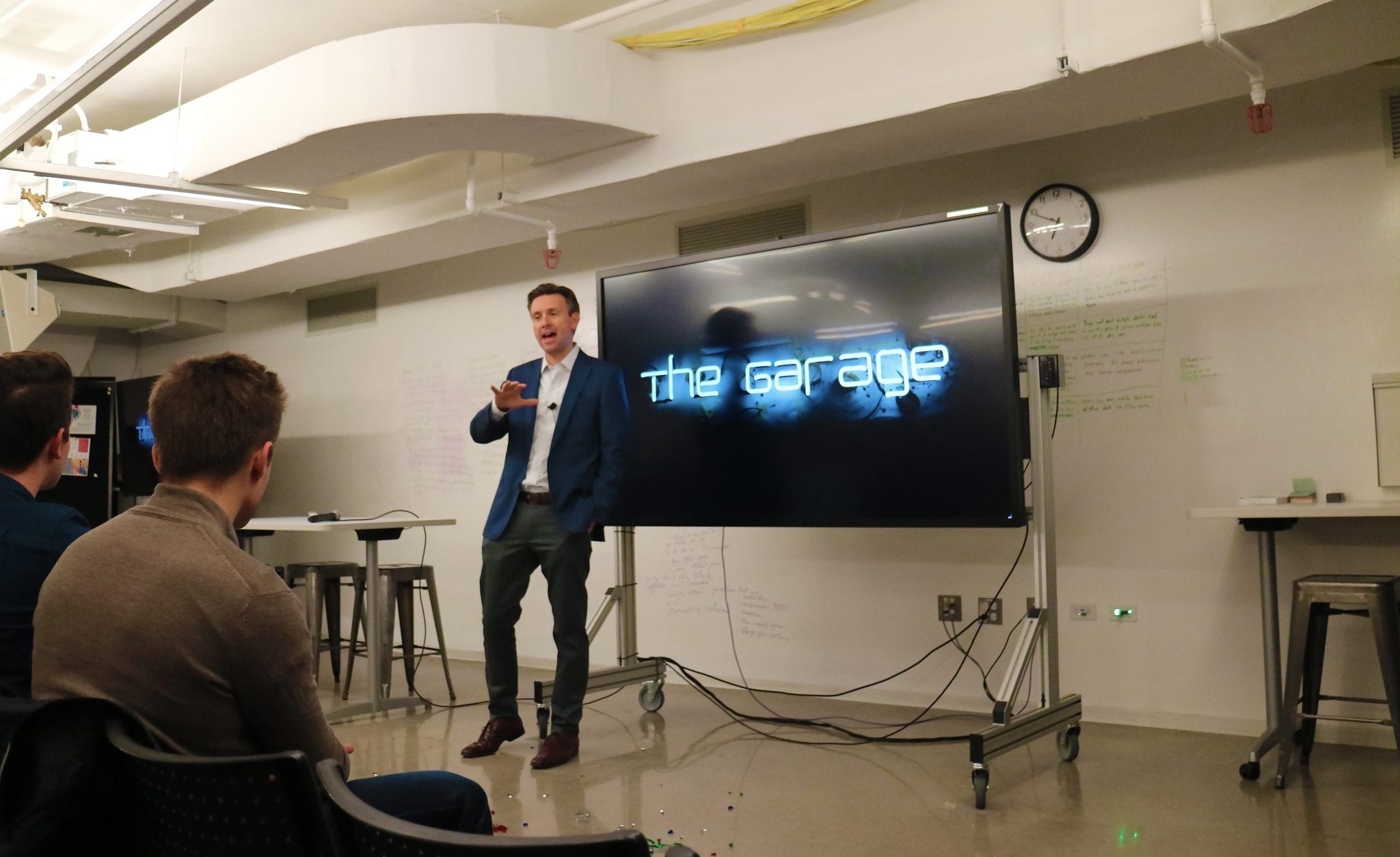 On Tuesday, November 6, Northwestern students all over campus were repping their “I Voted” stickers proudly as the midterm elections took place across the nation. At the BrewBike shop, students were even offered a free coffee for showing their “I Voted” stickers. All over The Garage, students were asking each other if they’d voted yet, and encouraging each other by sharing polling places. Even alum Stephen Colbert ’86 was rallying to encourage voting.

November 6 was something else, too: weekly Family Dinner at The Garage. Family Dinner is a weekly program offered to Resident students to promote community, sharing, and learning. It’s the one time per week that we all get together in the same room and bond over one of our favorite things at The Garage: good food. We share in each others’ successes, discuss learnings about our failures (not to mention, pop a confetti popper, just for fun) and we get to hear from established founders, alumni, and all around remarkable people making the world a better place. 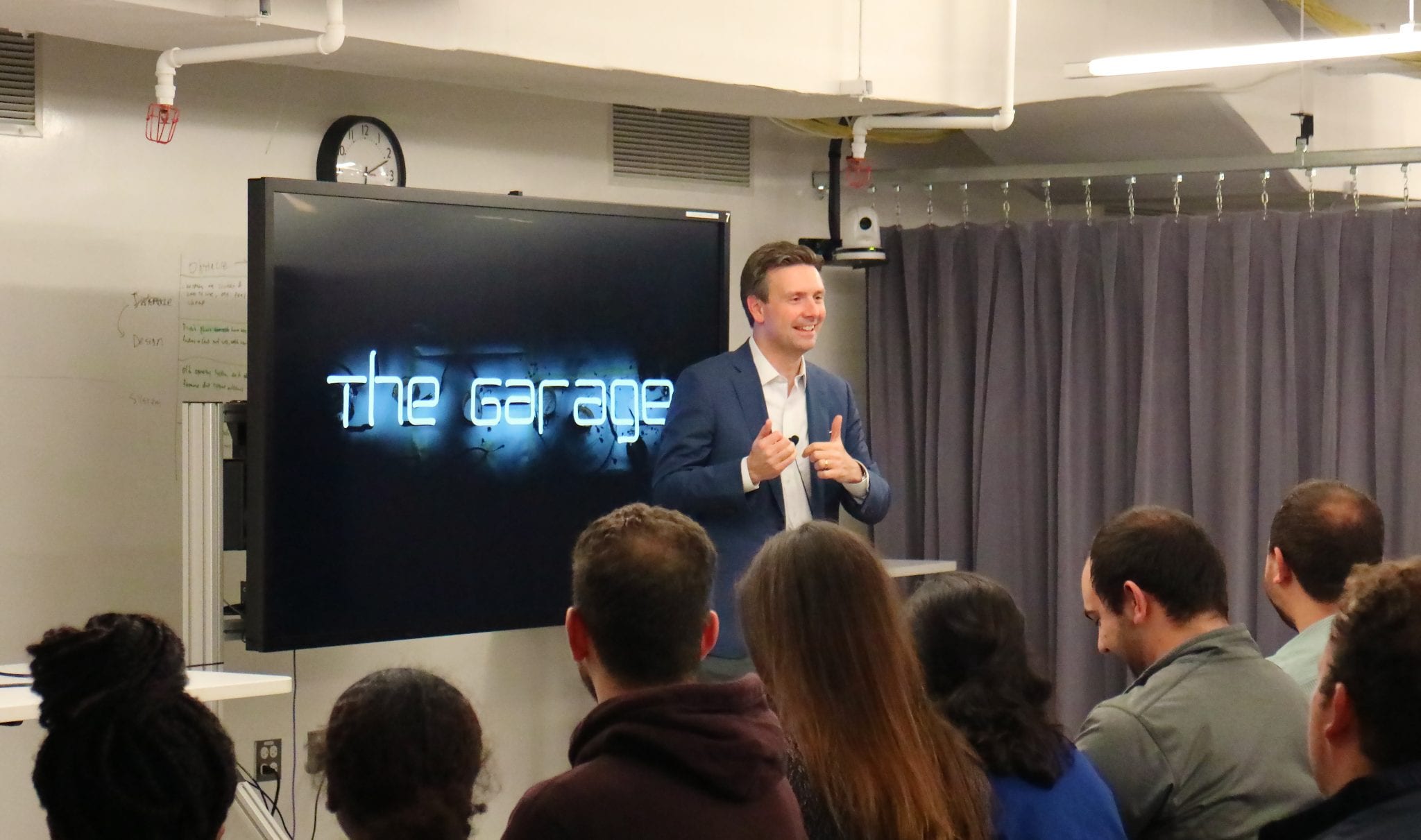 So for a special edition of Election Day Family Dinner, we decided to do something extra special for our students. We welcomed Josh Earnest to The Garage, former White House Press Secretary during the Obama Administration, and current Chief Communications Officer for United Airlines. Needless to say, we were excited.

After our usual housekeeping of announcements, successes, and failures – Josh took the “stage” in our Workspace. He was as eloquent and articulate as one would expect a former White House Press Secretary to be, and shared some really insightful words of wisdom with our students (along with some funny White House anecdotes). 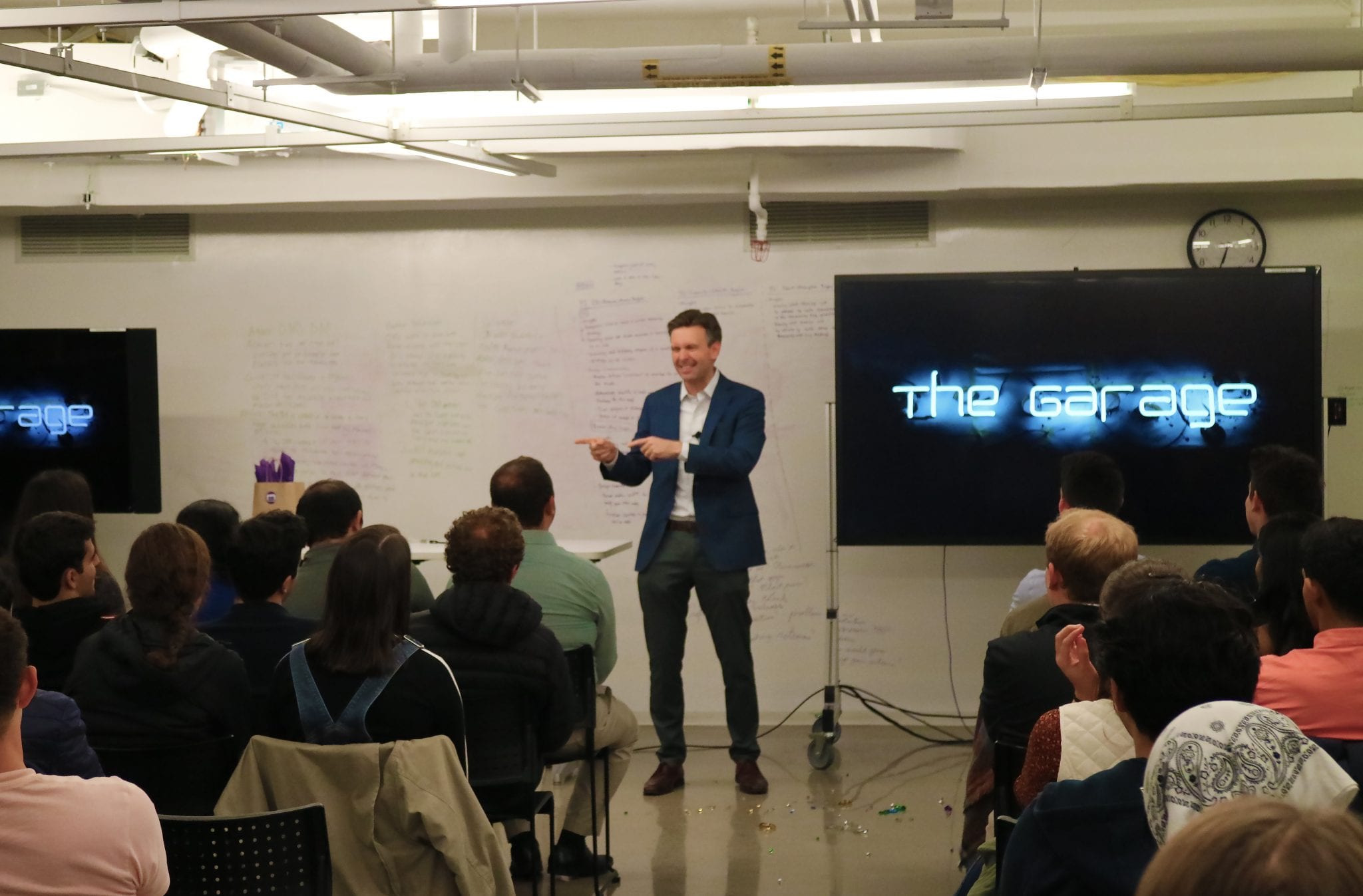 As a man who took the national stage for one hour every single day on television, Josh spoke to the importance of having confidence in his message. As entrepreneurs, our students are pitching their ideas to strangers, investors, and other students and confidence is a requirement to effectively communicate a message and why something is important. Intention matters. Josh reminded us that “it’s important to not walk into discussions determined to prove [people] wrong.”

Josh also spoke on the topic of audience. He reminded us that most of the people our student founders will encounter have a genuine interest to learn from them, and to approach discussions with this in mind. As a communications superstar, Josh also talked about the importance of body language and the value in-person interactions have as opposed to phone calls and e-mails, because you can employ additional methods of communication, like body language, and better showcase your confidence.

Josh ended with his go-to White House story. Tucked in, of course, was another piece of wisdom on good preparation. In early 2015, so much of the world had turned their attention to “deflate-gate,” the scandal surrounding Tom Brady and the New England Patriots. Following a press conference given by the Patriots quarterback on the subject, in which he addressed the topic for the first time to the media inciting SNL skits and critical articles, Josh Earnest stood in front of his bathroom mirror shaving and thinking about what he might say should the topic come up in his daily briefing. With a line ready, he took the podium, and sure enough, a journalist dropped a question on the recent press conference to which Josh had a great response, making headlines in VICE, USA Today, and ESPN. 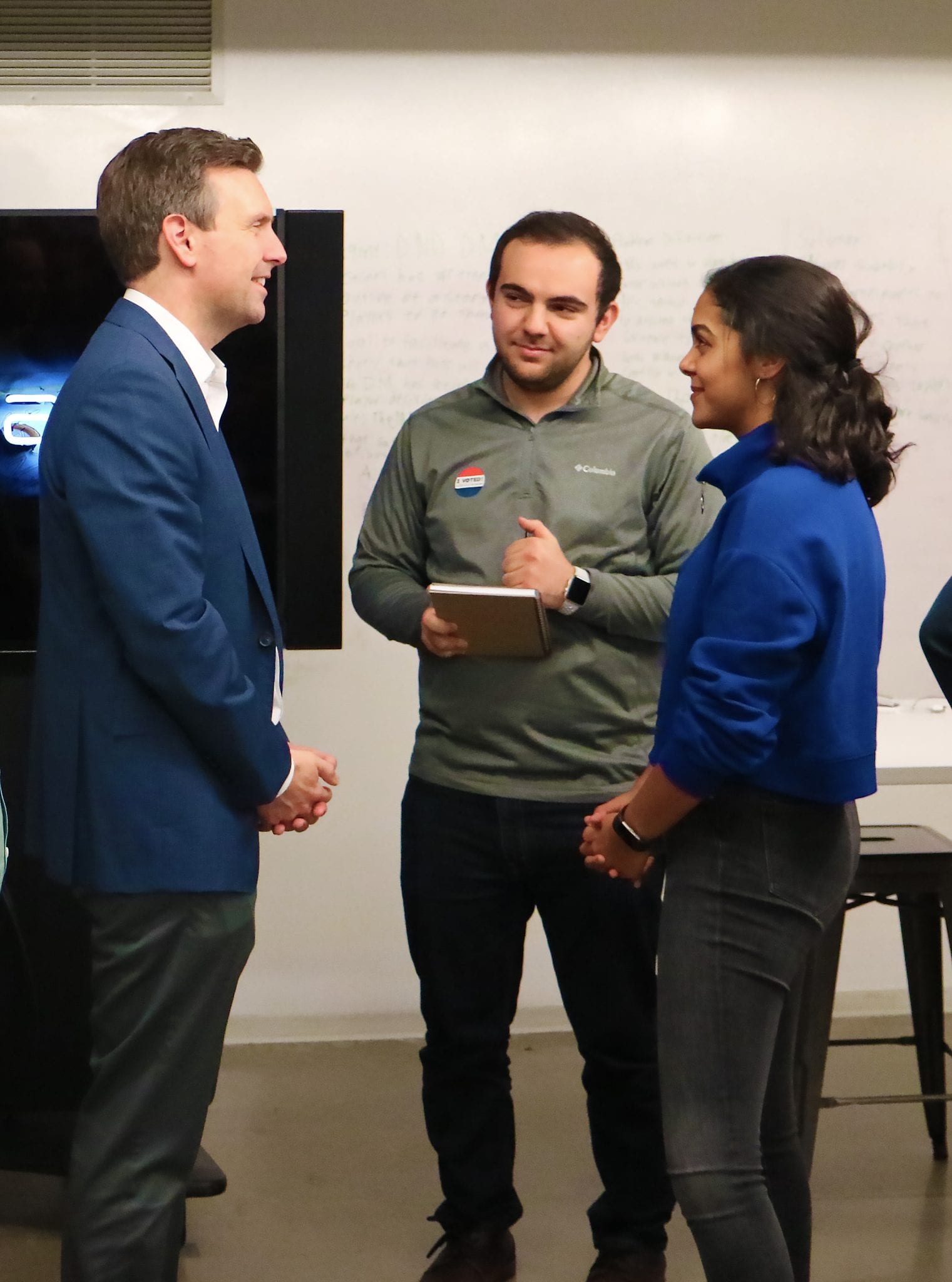 Shortly afterwards, Josh and his staff were aboard Air Force One on their way to India. When President Obama boarded, he shouted down the hallway looking to the conference room, “Josh! Why are you being so mean to Tom Brady?!” That morning, before the flight, President Obama was catching up on SportsCenter, and saw the last person he expected to see: his Press Secretary. 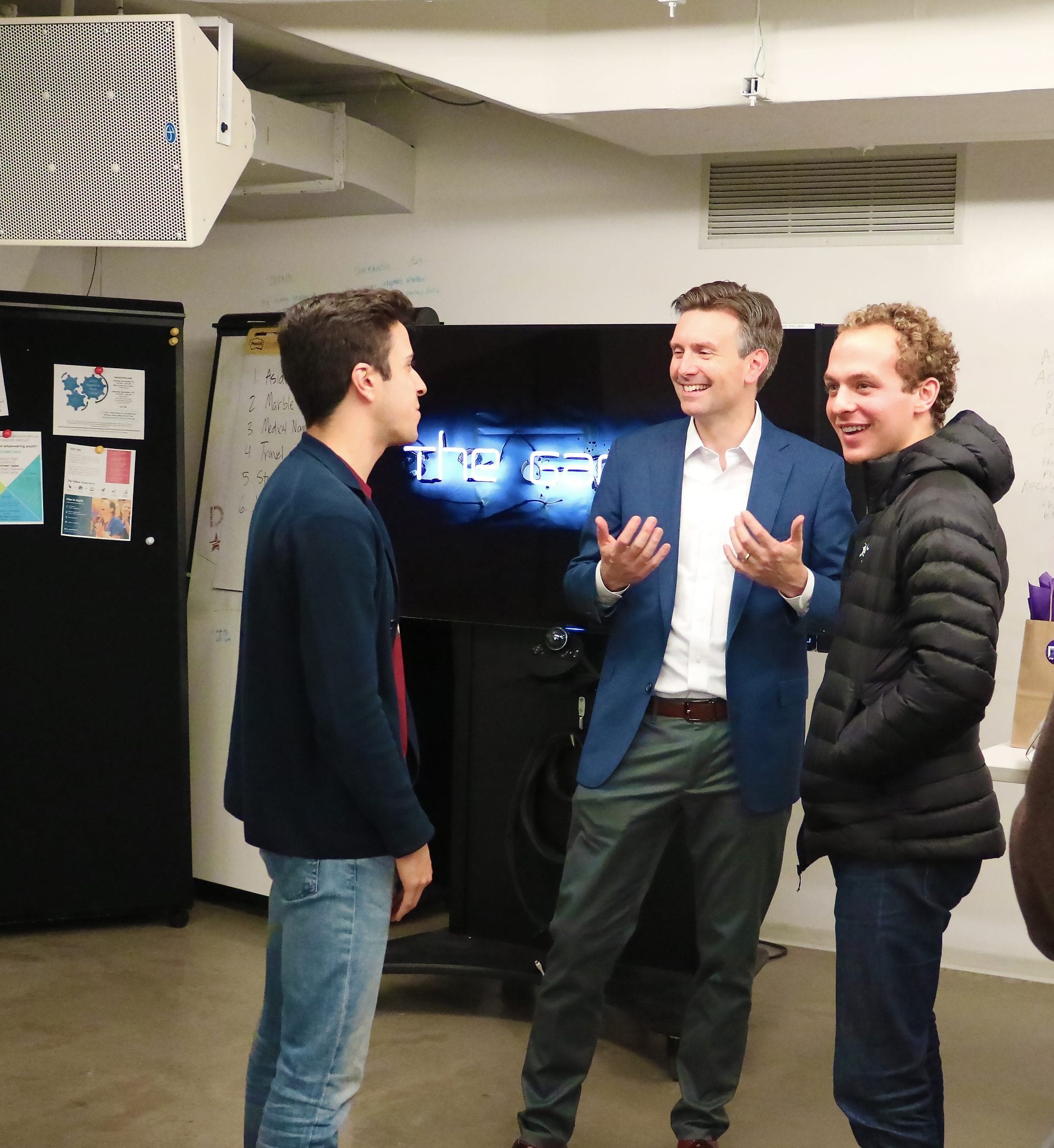 Stance on Tom Brady aside, we loved hearing from Josh, and learned some valuable lessons on communication and presentation. And yes, he totally noticed our “I Voted” stickers!