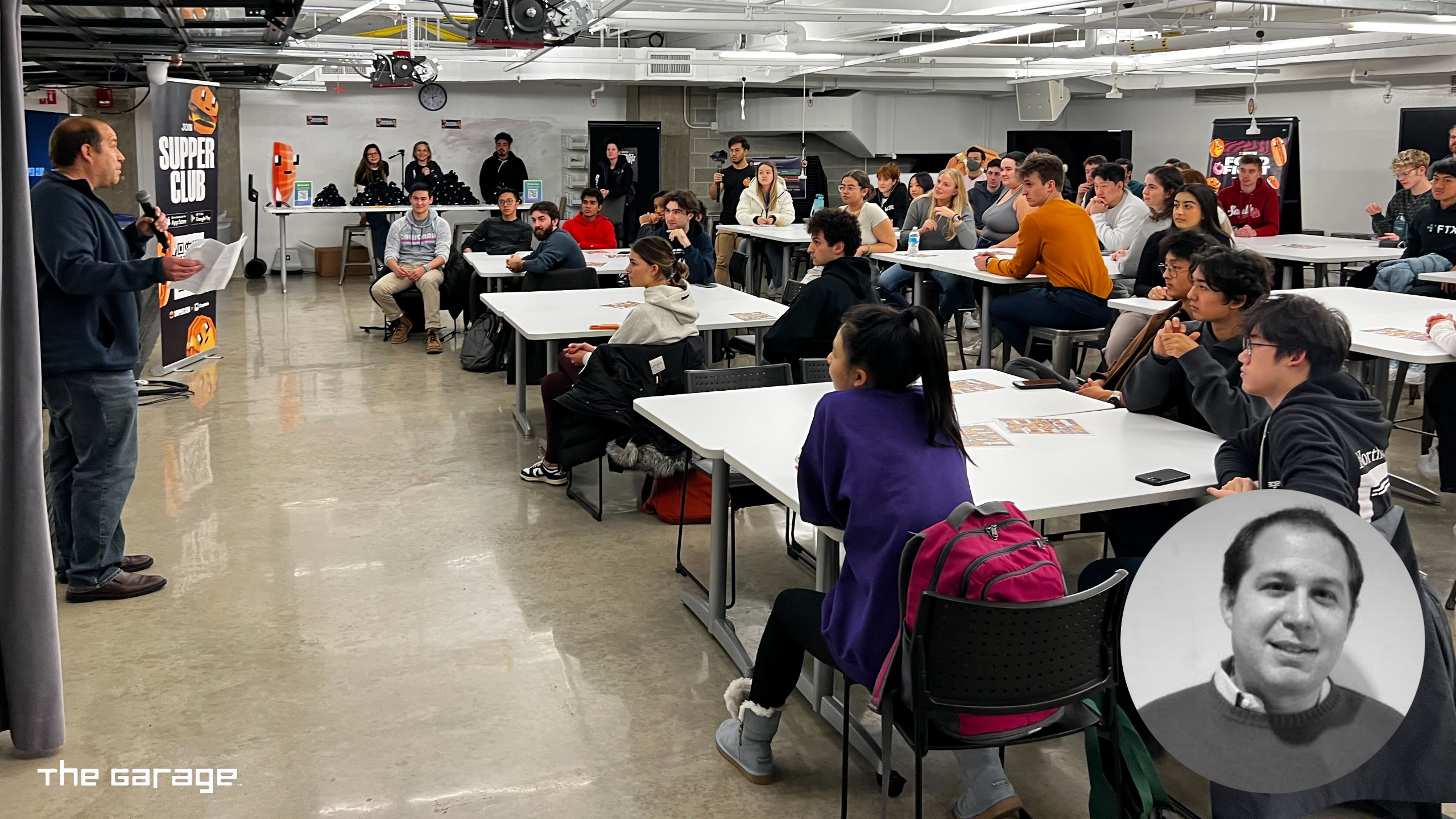 On Wednesday, November 17, The Garage welcomed Michael Saunders, CEO of Captain, to Family Dinner as a guest speaker. Captain is aiming to fix the food delivery industry by powering restaurants and their communities through technology, digital ordering, marketing, and Web3.

When Michael described the steps that ultimately lead to the creation of Captain, he started with his entrance into the food technology industry in 1997. As an undergraduate, he developed Campusfood.com, one of the first online food ordering websites. Michael spent years scaling the company to 300+ college markets before it was eventually acquired by GrubHub in 2011. He then joined GrubHub as an Entrepreneur in Residence for over four years. In 2015, Michael wanted to return to his engineering roots and became a mentor at The Garage.

Michael detailed two essential questions to consider when starting a company. The first: Why us? The second: Why now? To answer these questions, he recommended that Residents reflect on the problem they’re trying to solve, find the best members to join their team, and identify aspects of the industry that didn’t exist before.

Contemplating these questions before starting Captain led him to focus on cryptocurrency and blockchain as potential new technologies to disconnect the middlemen from food delivery. He also pointed out the benefits and drawbacks of entering new markets. Being early to a market means there’s endless potential, but it can also be difficult to start and things can quickly go wrong.

Despite the challenges, Michael decided to “jump in” with Captain. He didn’t know exactly where it would lead, but he knew there was a problem with digital ordering and recognized the potential of a new technology that could greatly improve the process. The company has since been able to empower a variety of local restaurants in the Evanston area when it comes to food delivery.

Michael introduced Supper Club, Captain’s “Web3 wallet for the future of dining, where foodies get rewarded for supporting their favorite restaurants.” Residents got the chance to learn about cryptocurrency and NFTs through a virtual scavenger hunt using the Supper Club app. Even students with no experience in crypto were able to perform their first on-chain transactions by purchasing food and swag with NFTs in their Supper Club wallets. This was a Family Dinner we definitely won’t forget!

Ethan Bledsoe ‘26 is a Mathematical Methods in Social Sciences (MMSS) major from West Lafayette, IN. He is a student aide at The Garage, tasked with managing different administrative, marketing, and operations projects. His favorite thing about The Garage is the welcoming and vibrant community of entrepreneurs.