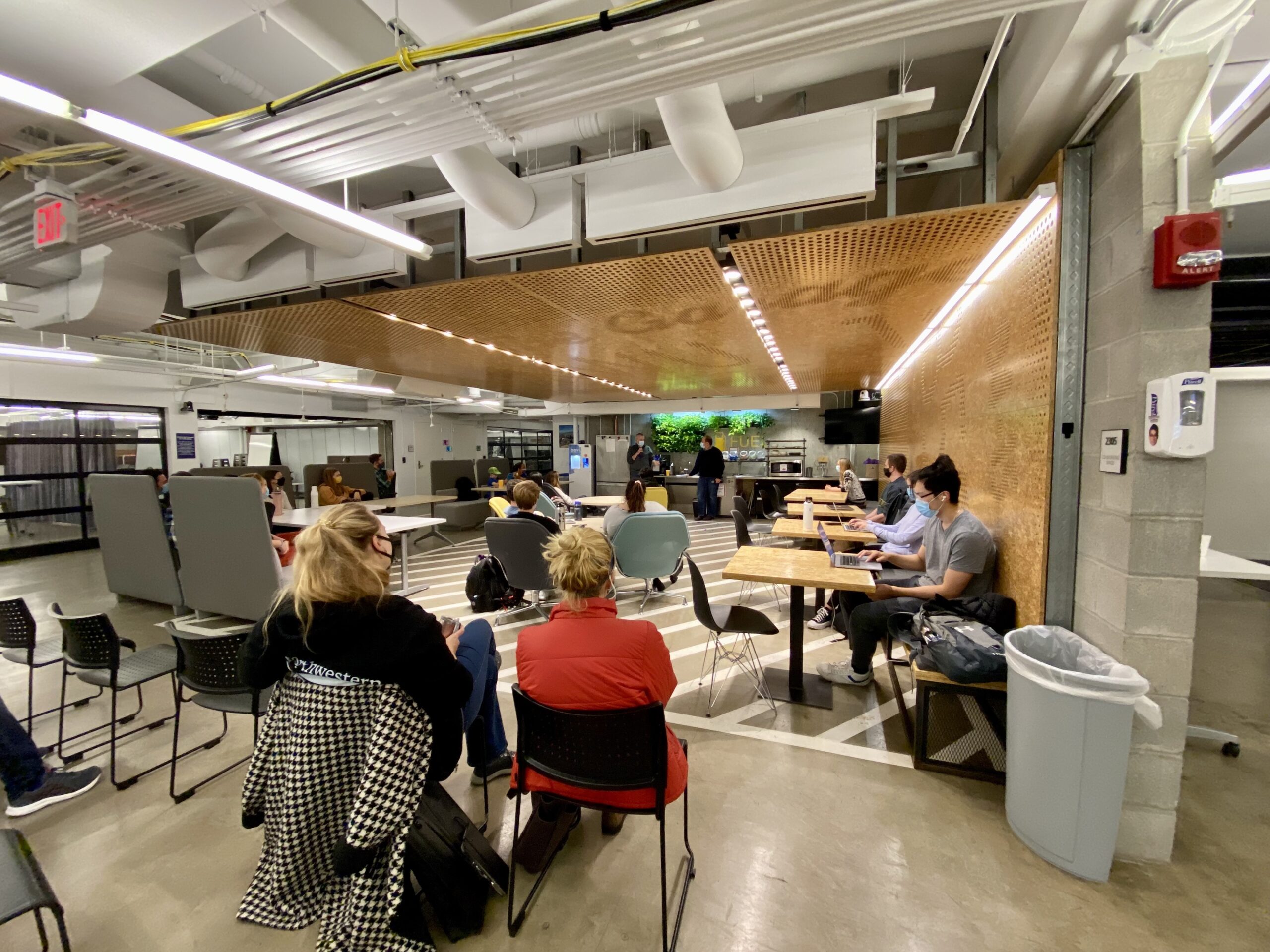 On Tuesday, October 27, The Garage held the first Family Dinner in the cafe in over a year. Residents were excited to gather together in a familiar space to hear Michael Saunders and Thomas Hayden, former Entrepreneurs-in-residence at The Garage, speak about their journeys and their current venture Captain. After sharing successes and celebrating failures from the past week, Residents were excited to hear from Mike and Tom, business partners who still provide mentorship to students involved in The Garage.

To start, Mike shared more about his story and time in the entrepreneurship community. In 1997, while he was a junior at Penn, Mike noticed how difficult it could be to get food delivered from some of his favorite restaurants. In order to solve this problem, Mike started CampusFood.com. Through this business, Mike would collect orders from students, fax them to restaurants, and then restaurants would deliver the food to students around campus. Although there was a need for a company like Campus Food, it took a long time for Mike to gain any traction. Despite the lack of immediate response, Mike “thought it was the right idea.” Mike said that on reflection, “being a little naive and stubborn is a great characteristic when you are starting out.” Over three years, the company saw growth from ten orders a day to 87 orders a day. Soon, Mike and his team began to work on scaling to other schools.

As Mike struggled to publicize, he and his team had an idea: “Let’s give away free food.” Taking all of the money the company had, Mike and his team gave free pizzas to all students who ordered for two weeks. Mike informed Residents that it “costs a lot to acquire customers” but students came back, allowing the company to grow. In the next year, the company went from 6 schools to 100, and then to 300.

Mike posed some important questions to Residents, “How do you get your distribution? What can you do today to acquire more customers? What do you know that other people don’t that will allow you to grow fast?” In order to continue growing, Mike created All Menus, a website that linked all menus across Google in one place. The website received 2,000,000 visitors a month and Mike redirected that traffic to Campus Foods, allowing the company to grow even more. Soon after, Campus Foods was acquired by GrubHub and Mike moved from New York to Chicago to join the executive team. While at GrubHub, Mike met Tom. Mike recognized “I was going to be [at GrubHub] for 4 years or forever.” Mike explained how companies either innovate or become banks. Wanting to continue their journey of innovation, Mike and Tom left GrubHub.

Over the last five years, Mike and Tom spent their time as Entrepreneurs-in-residence at The Garage researching new technology and deciding what would be next.

As time passed, GrubHub received a negative reputation for being anti-restaurant. Mike and Tom decided they would create a platform to help restaurants. From there, their next idea, Captain, was created. Captain is a platform that helps customers order directly from restaurants. “We want to build a team now to ride the wave when the time is right.” Mike and Tom are going to continue searching for a growth hack, lean in, and watch as the company grows.

Students left the talk ready to look for their own growth hacks and excited to work on developing their projects.