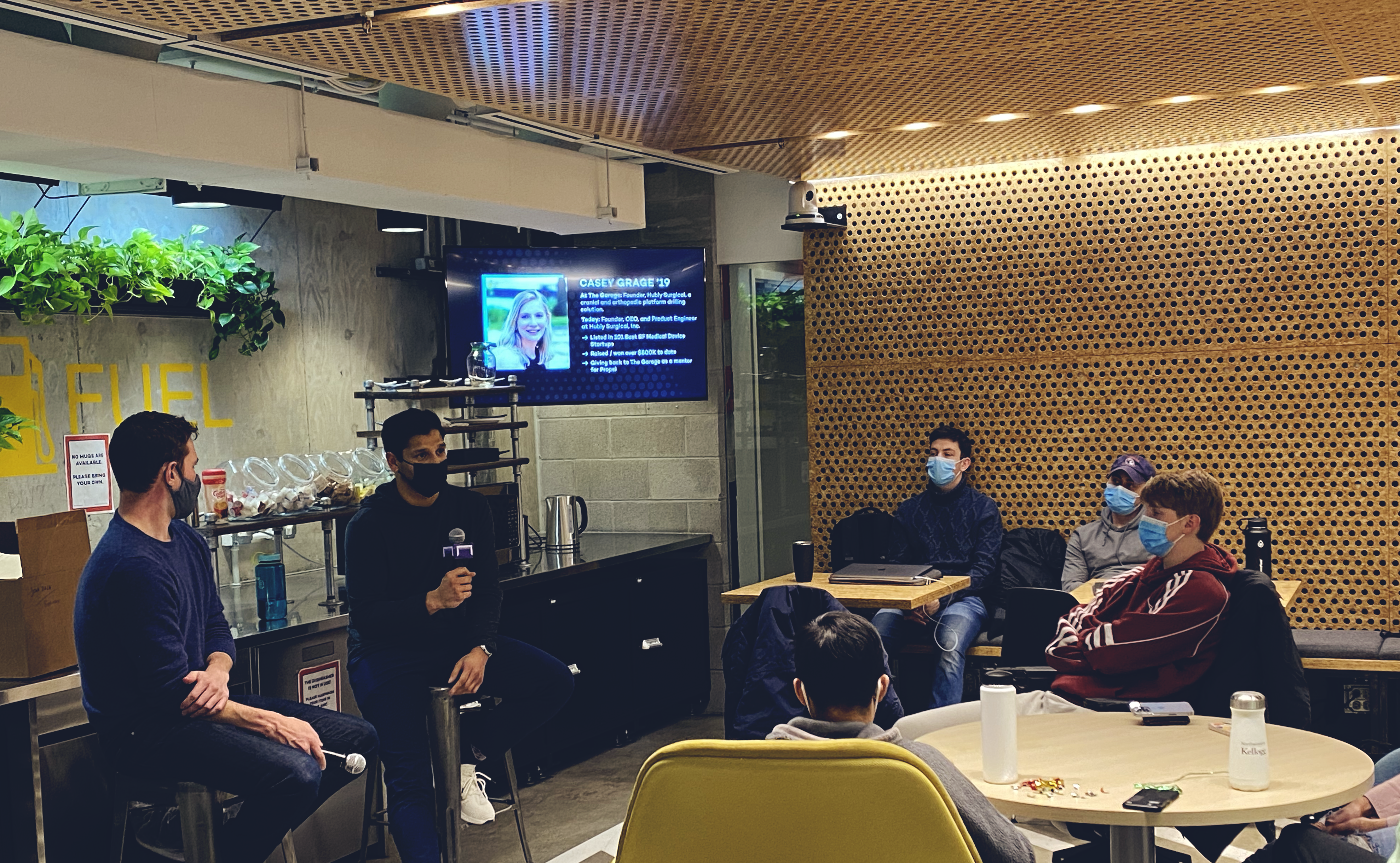 On Wednesday, February 2, Residents of The Garage gathered together for Family Dinner, excited for the first speaker of winter quarter. Student founders had the opportunity to listen to Raman Malik, Kellogg ’22. Raman is currently taking a leave of absence from his MBA studies at Kellogg to work on his startup full time, and sits on the Resident side of The Garage as one of its founders-in-residence. Raman spoke about his journey in entrepreneurship and his time at The Garage incubating his startup, Rhetoric. Rhetoric is “Grammarly for presentations,” and allows anyone to receive feedback on their work in a collaborative, easy way integrating both a pitch and a deck. Presentation skills are crucial no matter what level of a company you are in as they allow you to share your ideas and opinions in the most effective manner possible – this is why Rhetoric is working to make this feedback accessible to all.

Raman grew up in Birmingham, Alabama, and attended Colgate University for his undergraduate studies. While in school, Raman had no idea what he wanted to pursue as a career. He graduated as a Psychology major with an Economics minor and then entered Market Bridge, a data analytics company, as a consultant. “Consulting was great because you are exposed to a lot of different problems very quickly,” said Raman.

When he was ready to leave the company, Raman applied to numerous jobs. He hoped to join a company to work on an up-and-coming product he used himself. One of those companies was Lyft, which at the time was a new tech startup. When it was time for the Lyft interview, Raman felt incredibly prepared because of the numerous other jobs he applied for and had interviews with. “You can only get better at interviews with practice,” he shared with the Residents.

Raman began his position on the marketing team at Lyft with numerous opportunities to explore since so many different things needed to be done in the new company. Raman was learning many new skills and solving numerous problems at an incredibly fast pace. When working on the subscription model for Lyft, Raman discovered, “I love building stuff from scratch and moving very fast.”

This experience made it clear to Raman that he wanted to move away from data analytics, where he had found himself at Lyft, and into a new space, leading him to apply to business school. While at Kellogg, Raman brainstormed numerous ideas for his own company, one of which was a different version of Rhetoric. That summer, Raman joined Jumpstart, The Garage’s pre-accelerator program. Jumpstart is a competitive opportunity for 10 student founded startups to work on their ventures full time during 10 weeks of the summer and receive $10,000. It culminates with Demo Day – a live pitch competition where $10,000 in non-dilutive capital is distributed to the top three pitches. While in the program, Raman focused on creating a beta version of Rhetoric and holding interviews with potential customers. Raman wrapped up the summer by winning first place at Demo Day and $4,000! Watch Raman’s first place pitch alongside our other Jumpstart team here.

After gaining lots of traction over the summer with Jumpstart and finishing his first round of fundraising, Raman made the decision to leave school in order to have more time to focus on his venture. From there, Rhetoric continued to grow and iterate to become what it is today. Raman recently launched Rhetoric with a worldwide virtual startup competition, Podium. As an asynchronous competition, it’s truly the first of its kind where those who enter can win cash and get real feedback on their pitches from a knowledgeable group of professionals, founders, and venture capitalists.

Students really enjoyed hearing about Raman’s journey and were left with the important message of: “Be open to the idea of change. Pivots are an exciting opportunity!”