Last week, the five Northwestern juniors who comprise the second cohort of the Little Joe Ventures fellowship had the opportunity to visit some of the most innovative technology companies in Los Angeles. Lilliana de Souza, McCormick ’21; Sophie Davis, Medill ’21; Ahmed Al Madan, Weinberg ’21; Shyam Mani, McCormick ’21; and Nissim Senfeld, McCormick ’21; left Evanston Wednesday evening for a packed schedule of office tours and meetings arranged to give them a wider perspective of innovation and entrepreneurship in the real world.

The first stop for the trip was SpaceX’s headquarters and rocket manufacturing facility in Hawthorne, California, where the students learned about SpaceX’s history and ambitions, including building a satellite internet product comprised of thousands of satellites and sending humans to Mars. During a walking tour of the factory floor, the group saw employees working on the assembly of each stage and component of SpaceX rockets, including the Dragon Capsule which will carry the first SpaceX astronauts into orbit in just a few short months. 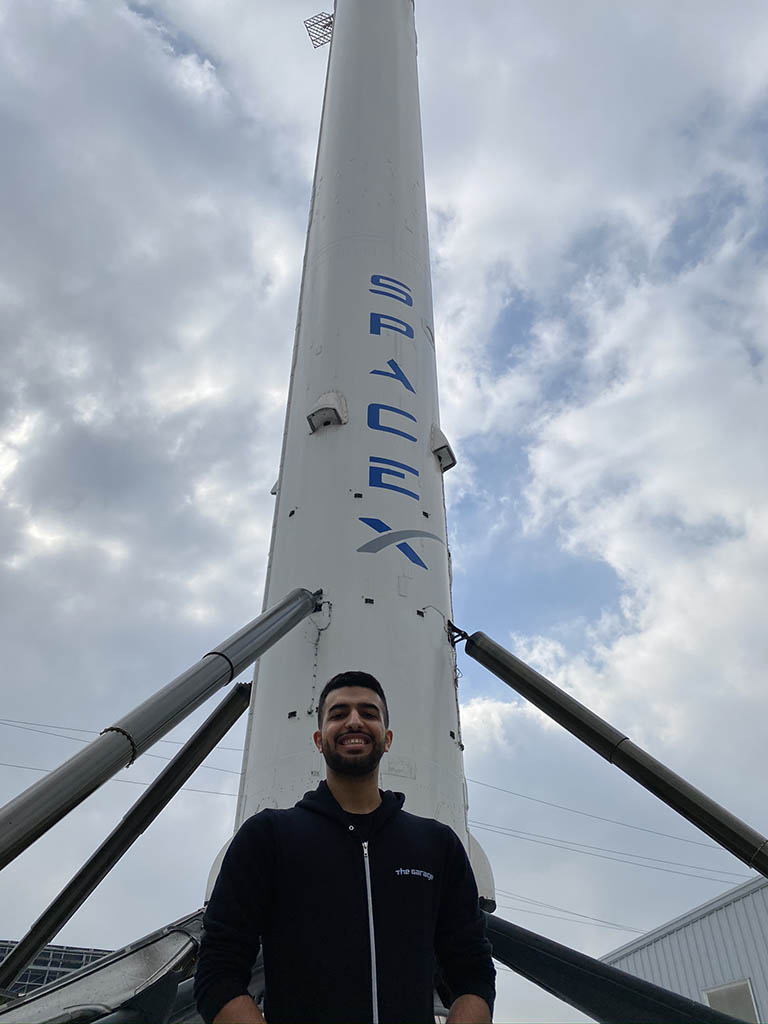 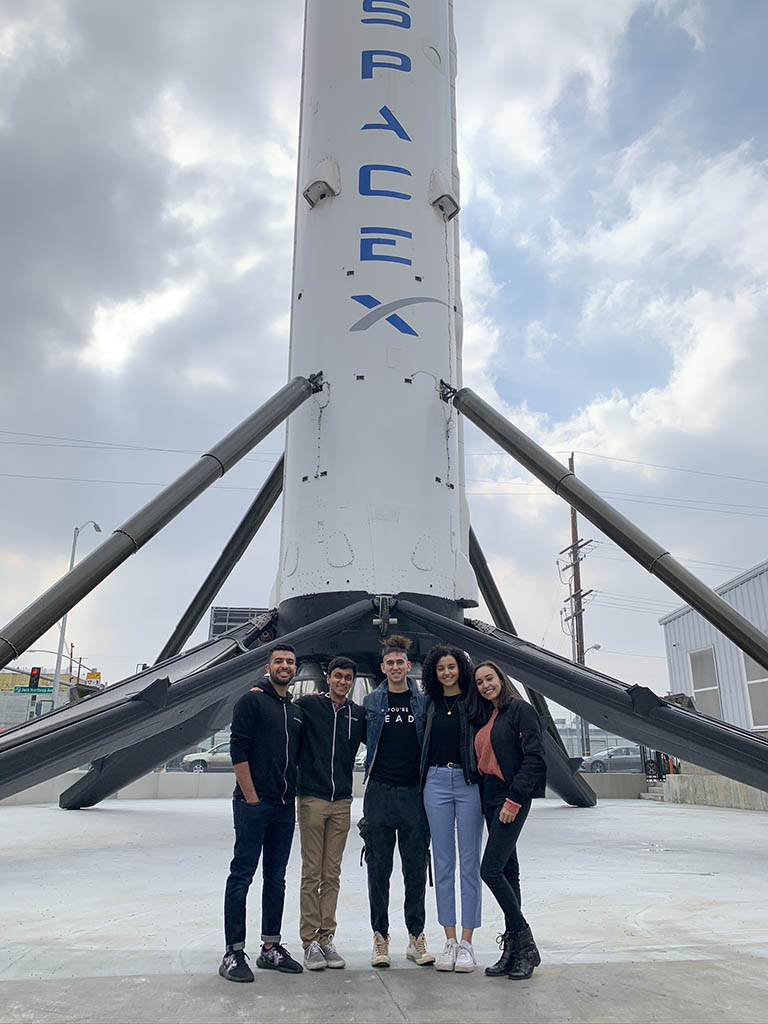 After a photoshoot with SpaceX’s first ever successfully recovered first stage booster, the group moved on to a tour and taste-test at Beyond Meat’s innovation center. Beyond Meat produces plant-based imitation meat products, the most well-known being the Beyond Burger. Chief Innovation Officer Dariush Ajami led the students through the different laboratories of the R&D facility, including the color lab, flavor lab, texture lab, and testing lab. Afterwards, the group was treated to a taste test of the Beyond Burger for lunch, while Chief of Staff AnneMarie McDummotte described her experience of growing from an eight person team when she joined in 2012, to over 400 employees in the now public company. AnneMarie also explained the company’s mission of reducing the world’s meat consumption as important to both human health and the planet. 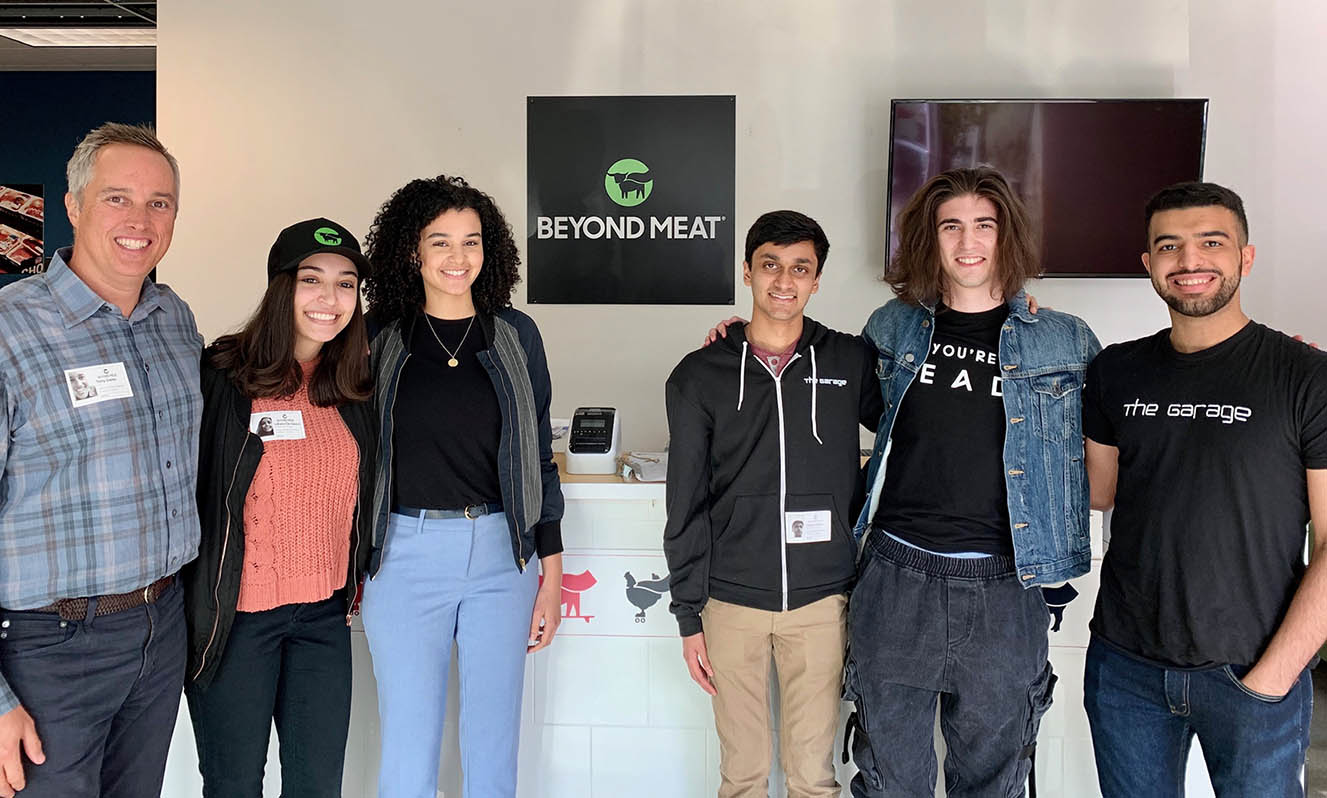 Omaze, the online fundraising platform that offers sweepstakes for experiences and prizes in support of charitable causes served as the final office visit on the first day of the trip. After a tour of the open-office setup complete with celebrity photos, lemon trees, and plenty of employee dogs roaming around, the students sat down for a discussion with co-founder & CEO Matt Pohlson, President Will Kassoy, and Head of Strategic Partnerships Hannah Kamran. After learning more about the company’s history and impact, including over $150 million raised for over 300 charities around the world, the Omaze team invited feedback and suggestions for campaigns and tactics that the students thought could perform well on the platform. One of the student’s suggestions hadn’t been publicly announced, but was already in the works! 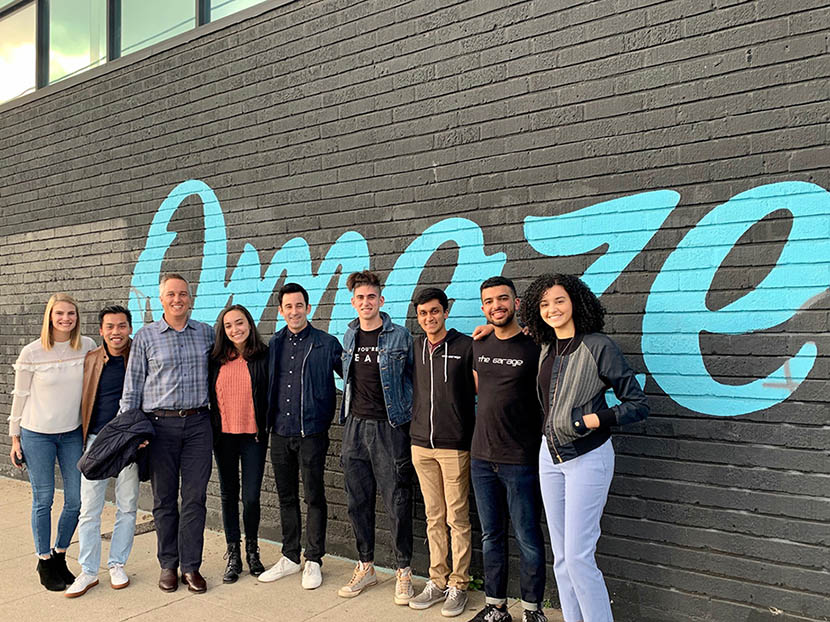 The following morning, the fellows convened at the office of the program’s donor, Tony Owen ’97, ’03 MBA, which included a stunning and unique car collection. Tony arranged for two successful entrepreneurs to spend an hour each with the group, recounting their entrepreneurial journeys and answering questions about the lessons they’ve learned and how to overcome obstacles. 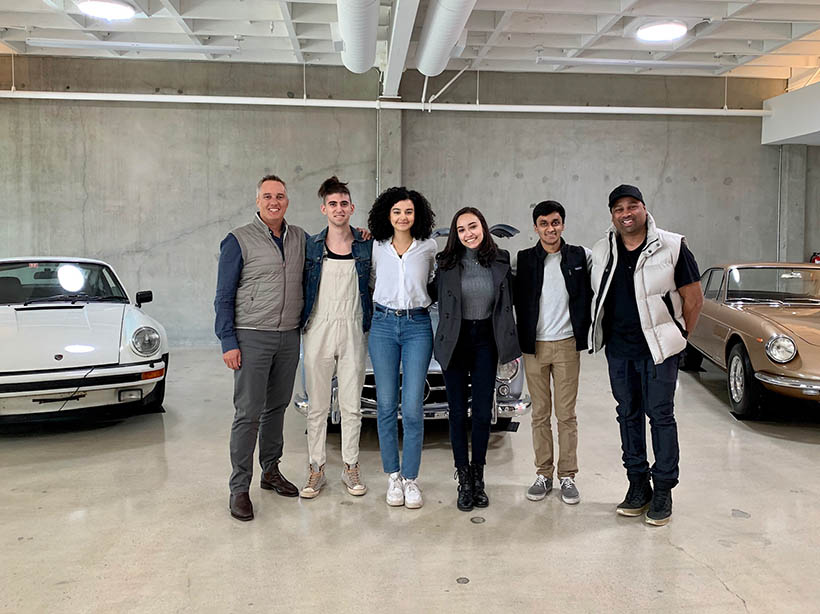 First, the students met with Chuck Ursini, who is the founder and former CEO of System1, a digital advertising market-maker based in Venice, California. Chuck described the trade-offs he made to build a successful company, and the importance of developing interpersonal skills and fostering relationships with the people that you work with.

Next, the group met Sam Prince, a doctor, humanitarian, and entrepreneur who founded Mexican restaurant chain Zambrero when he was just 21 years old. Sam told a captivating story of becoming a young doctor, providing medical aid in a Sri Lankan war zone, and founding One Disease, a nonprofit dedicated to eliminating disease in Australia, among other impressive endeavors. Sam shared some of his personal philosophy, which included upholding and amplifying the kindness that he receives, being authentic to himself, and knowing his purpose, which he divulged as “having the courage to live out my best thoughts.”

Next up for the Little Joes was lunch with a famous guest: Maye Musk, an entrepreneur, model, dietitian, and mother of Elon Musk! Maye is the author of a new memoir, A Woman Makes a Plan, which she generously signed copies of for every student. During lunch, Maye described her personal journey, from escaping an abusive spouse, to starting her private practice, working as a model, and being a single mother of three throughout it all. When Maye, who is 71 years old, was asked which age she would most like to return to, she emphatically responded “This age! I’m having a lot of fun.” 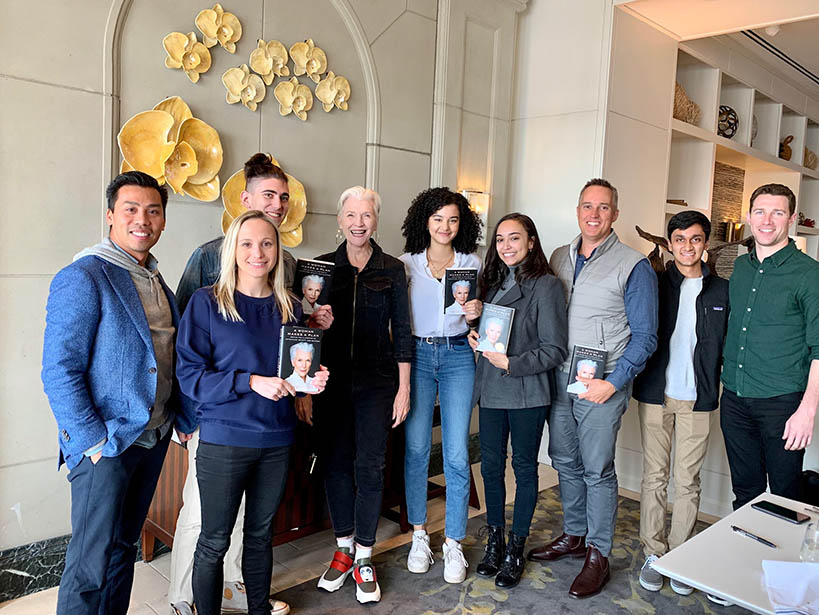 Following lunch, the group met with the management team of goop, the lifestyle brand founded by actress Gwyneth Paltrow (or “GP” as her employees refer to her). While GP wasn’t able to join due to travel, goop’s CFO, CTO, Head of Partnerships, Head of Wellness, and Gwyneth’s former Chief of Staff sat down with the students to describe goop’s 12 year history, including growing from 9 employees in 2014 to over 250 employees today. The team also explained the company’s plans for the future, and answered student’s questions about what it’s like to work at a startup.

The final office visit of the trip was to Snap’s Santa Monica headquarters, which was organized by Medill M.S. graduate Mark McMaster, who serves as the Head of Emerging Commerce. After a short tour of Snap’s main building on the campus, the group was joined by Quincy Kevan, the Head of Official Accounts and a 2010 Northwestern alum, and Fai Nur, a 2017 Northwestern alum who works in the Communications department. Mark, Quincy, and Fai each described their professional journeys from Northwestern to their current roles and gave their own perspectives on the values of working for a “big” tech company after graduation. After an hour-long conversation, the Little Joes were sent home with armfuls of Snap “swag!” 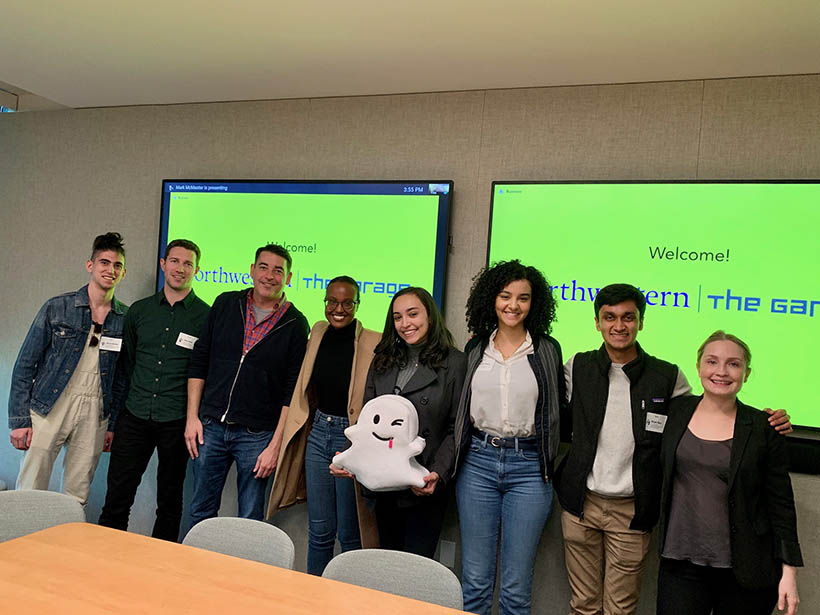 For their final dinner in Los Angeles, the Little Joes were joined by program donor Tony Owen and a group of successful entrepreneurs and Northwestern alumni including Maura Rampolla ’90 (co-founder of Zico Coconut Water), Lynn Hopton ’82 KSM ’86 (co-founder of HalseyPoint Asset Management), Greg Davis, Jamie Star KSM ’89 (CEO of Longview Asset Management), Audrey Kania (co-founder of the World Poker Tour), Matthew Carpenter ’15 (founder of Howevvr), and two alumni of The Garage at Northwestern, Ali Movassaghi ’18, and Kripa Guha ’19. Over a four hour meal at renowned Italian restaurant Scopa in Venice, the group of students and professionals shared their backgrounds, interests, and ambitions to build something in the world. After a whirlwind two days of conversations with engaging leaders of innovative technology companies, the students had a lot to talk about and a lot of excitement to share.

Saturday morning, the fellows reflected on their shared experience from the past 48 hours over a brunch of avocado toast and pancakes. Next, the fellows heading to Venice Beach to get some sun before heading back to frigid Evanston. As one fellow put it “I really appreciate being nominated [for the fellowship.] It truly changed the trajectory of my Northwestern journey, and I am so grateful for that.” 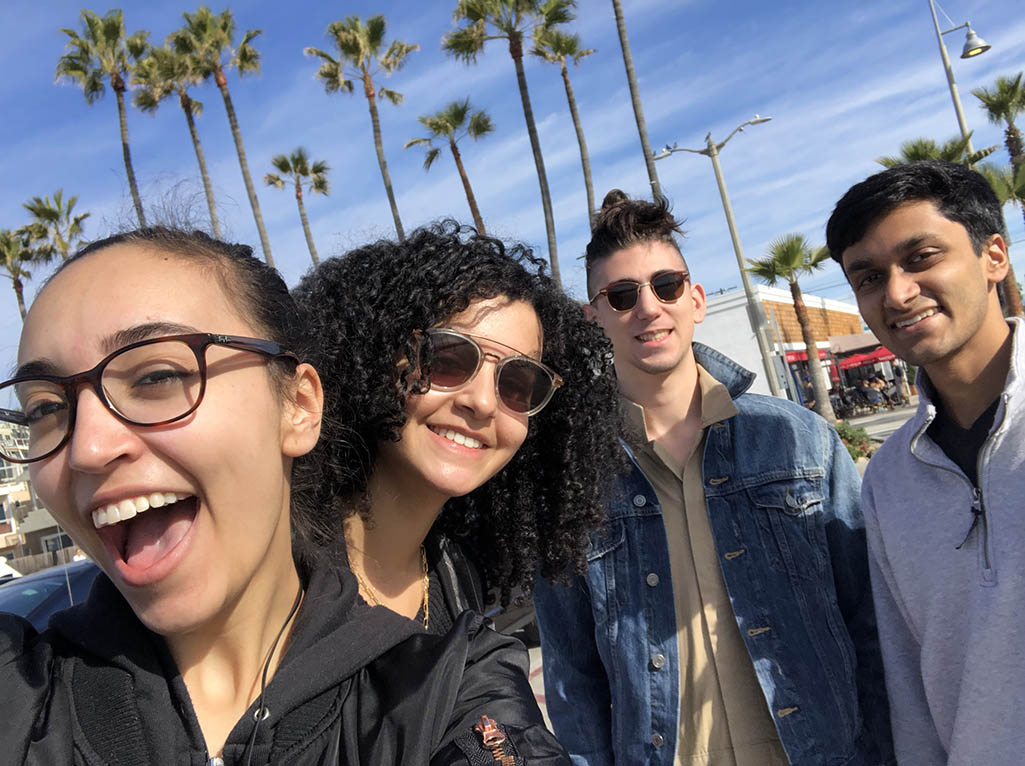 Mike is the Director of The Garage SF. He is responsible for local operations, programming, and building a community of entrepreneurial focused Northwestern alumni, students, and faculty in San Francisco. Prior to The Garage, Mike was an investor at a venture capital firm founded by Northwestern alumni, where he provided support and mentorship. He began his career serving in a multitude of strategy-focused roles at one of the largest media companies in Los Angeles. Mike is a proud Northwestern alum, having graduated with a BS in Communication focused on TV & Film.