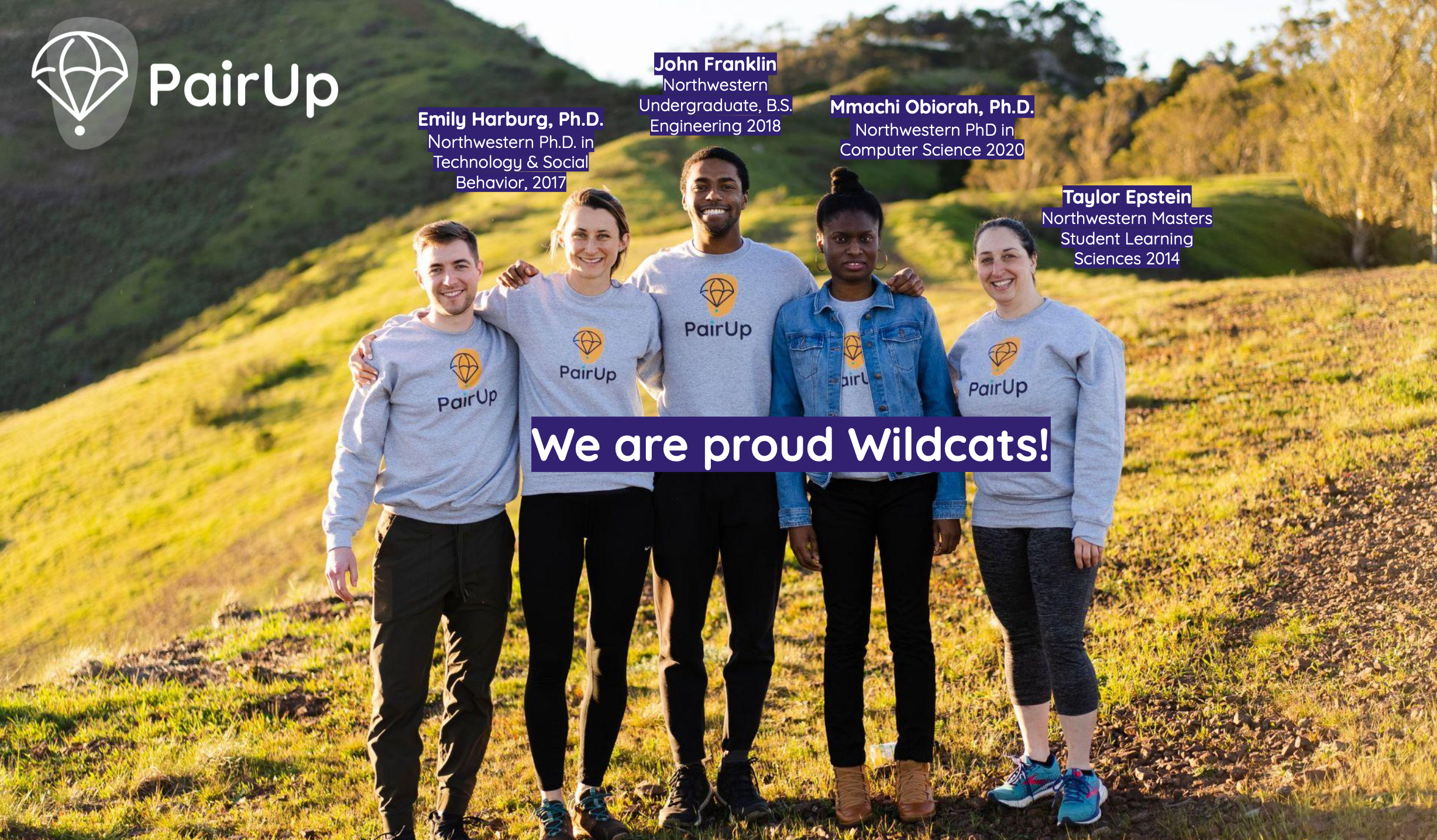 The Garage at Northwestern’s NUseeds Fund has invested $100,000 in PairUp, a team with four Northwestern alumni on the founding team. PairUp creates a seamless mentorship experience to maximize learning, growth, and social support in organizations. NUseeds’ investment was part of a $1.5 million pre-seed round for the company.

Emily Harburg (PhD ‘19), co-founder & CEO, was inspired to build PairUp when working with a student named Linnea at Brave Initiatives, a non-profit organization Emily co-founded in 2015 focused on helping women learn how to code. Linnea studied Computer Science in college and landed a job in tech after school, but within 9 months, she quit because she felt alone at work and didn’t see pathways for her growth. After hearing Linnea’s story, Emily wanted to find a way to scale and equalize social support, mentorship, and collaboration for all people at work.

While earning her PhD in Technology & Social Behavior at Northwestern, Emily began to research the space more deeply, and wrote her dissertation about building digital tools to support novice workers. During the pandemic, she realized the critical importance of finding ways to support staff  – whether working remotely, in person, or hybrid – which eventually led to the idea for PairUp.

PairUp’s mission is to build software that creates seamless opportunities for building authentic and helpful workplace relationships. To do so, their software matches, connects, and prompts learning between pairs focused around areas of growth and social support. The team envisions a world where all people can feel connected and thrive, and all organizations foster mentorship, learning, & belonging within their communities.

Emily commented on the Northwestern connection and NUseeds investment, “Northwestern played a big role in us coming all together – 4 of us met at Northwestern! John and I collaborated on research in the Delta Lab. He and I also both were active in The Garage and participated in VentureCat. Taylor and I took several classes together through SESP, and co-consulted on a project for Design for America. In addition, Mmachi, John, and I collaborated on research projects together within the Computer Science and Engineering programs. We are grateful for the community of support that exists within the NU and Garage community.”

Akshat Thirani (McCormick ‘16), co-founder and CEO of Amper Technologies and a member of the NUseeds external investment committee commented on the decision, “PairUp is an exciting business and the team has built a strong foundation for growth. It was very impressive to see the diligence and depth of market and user research.”

NUseeds invests a standard $100,000 in 1-3 companies per year. Investable companies include founders who have graduated from a degree-seeking Northwestern program in the past 2 years and participated in at least one program at The Garage or VentureCat while they were a Northwestern student.