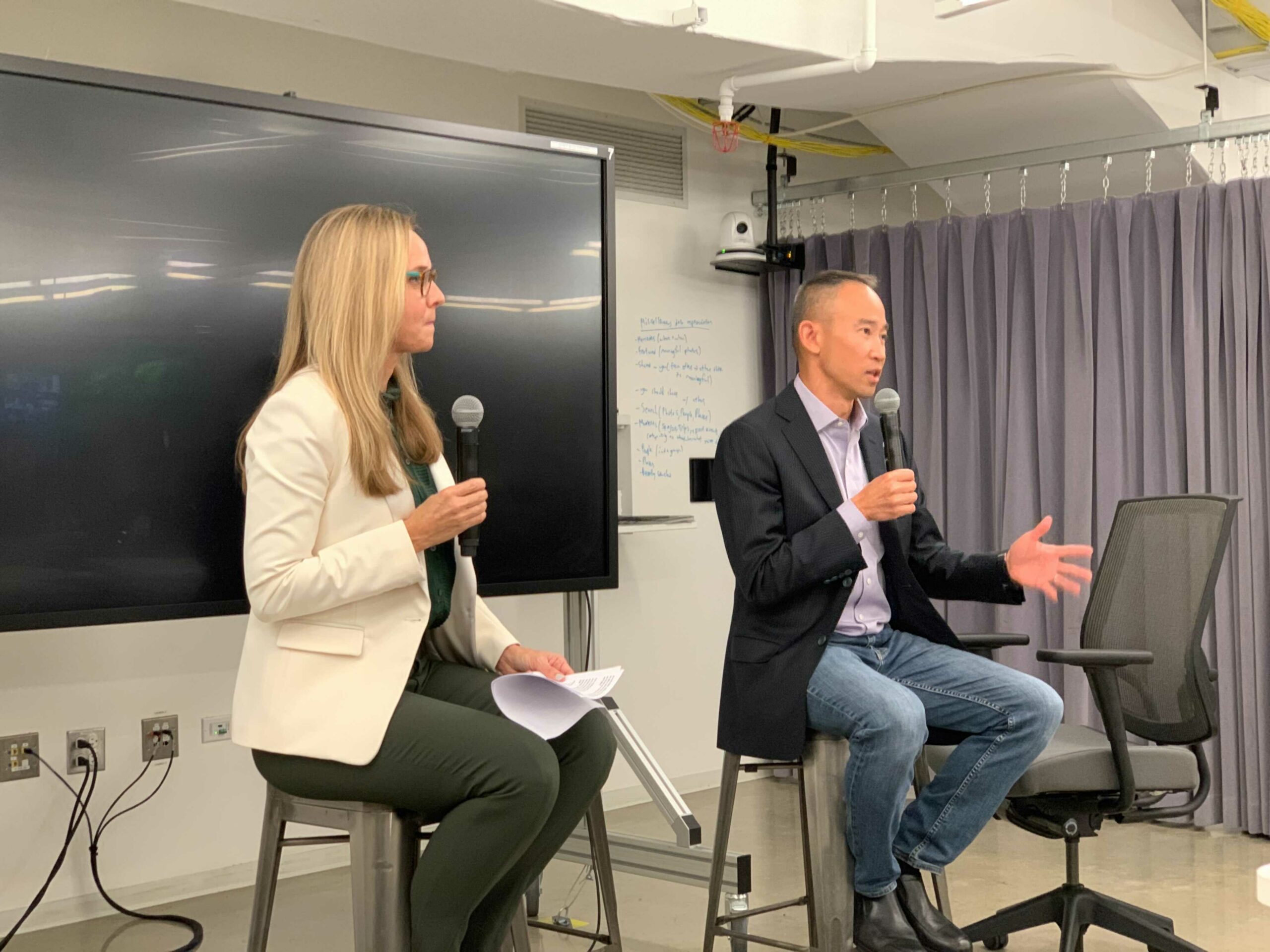 What does it really mean to run a startup? This question is impossible to answer unless you have experienced it for yourself. On October 15, 2021, Northwestern Alumni Relations and Development hosted a gathering at The Garage as a part of Reunion Weekend to hear Dennis Yang ’95 share his insight into what it means to be the CEO of a company. Formerly the CEO of Udemy, Dennis is a seasoned tech entrepreneur having launched and grown innovative startups around the world. As part of the event, Dennis aimed to share insight into evaluating opportunities, building teams, and scaling for growth.

While attending Northwestern, Denis Yang pursued a degree in chemical engineering, something that later shaped his life and career. “Through my time at Northwestern, I developed a handful of key skills,” Yang shared. “I developed the ability to learn, as well as humility and perseverance.” Yang went on to share that these lessons were crucial when he entered the world of startups. “You get to hear ‘no’ a lot in the startup world,” said Yang. He encouraged current students attending the event to get comfortable with that reality and emphasized the importance of determination.

After college, Yang knew he did not want to be a chemical engineer and applied to 80 different companies in the business world. After receiving one yes and 79 no’s, he began his career in consulting and finance and taught himself everything he needed to know. After his time in finance and consulting and receiving his MBA, Yang spent ten years working at a variety of different startups, none of which were successful.

In 2012, Yang joined Udemy. “It was extremely risky and still had not yet found product-market fit,” he expressed. Udemy is an online platform that allows people who are passionate about a topic to create courses for others to take. Yang expressed that ten years ago, the idea of a platform like this seemed crazy. However, as someone who believed in the future of education technology and enjoyed exploring new things and betting on the future, he saw the potential in the company. When Yang joined the company there were less than 15 people. Yang noted that building a startup is not exclusively about technology, “You are building human systems and at times it can be hard to get everyone aligned.” Yang continued to say that as a CEO, the culture you develop is just as important as the product and that he is most proud of the culture and company environment that Udemy had built.

When asked if Yang always knew if he wanted to be a CEO, he explained that being a CEO “is not nearly as glamorous as people may think it is.” If he had known what it really entailed, he may not have been as naively excited about it. Yang explained that every decision one makes directly impacts the lives of customers and employees and that oftentimes CEOs are faced with decision fatigue due to “terrible answer A, or horrible option B.” However, Yang believed in the mission of the company and continued to make tough decisions in order to allow it to grow.

One lesson Yang worked to impart to listeners was the importance of your team. As a CEO, you can’t be an expert in every technical or functional area but it is important to be able to hire and motivate those people who do have those expert capabilities. It is the leader’s job to make sure that the people with those skills are aligned with the company mission and can communicate with each other in order to best support the company. When Yang won the prestigious Ernst & Young Entrepreneur of the Year award, he made sure to acknowledge his whole team and the broader Udemy community.

Yang finished his talk by speaking about what it is really like to work in a tech startup. As the leader of a business, what you do will differ from day to day and especially as the company grows. One needs to be flexible in all situations and understand the risks and rewards of every scenario and have an innate curiosity and drive to learn. Yang left listeners with two important pieces of advice, “it’s important that you have to be able to sell the mission and you need to be comfortable with hearing no.”

After his talk, Yang was happy to speak with both students and alumni, answering questions as well as offering one-on-one advice.