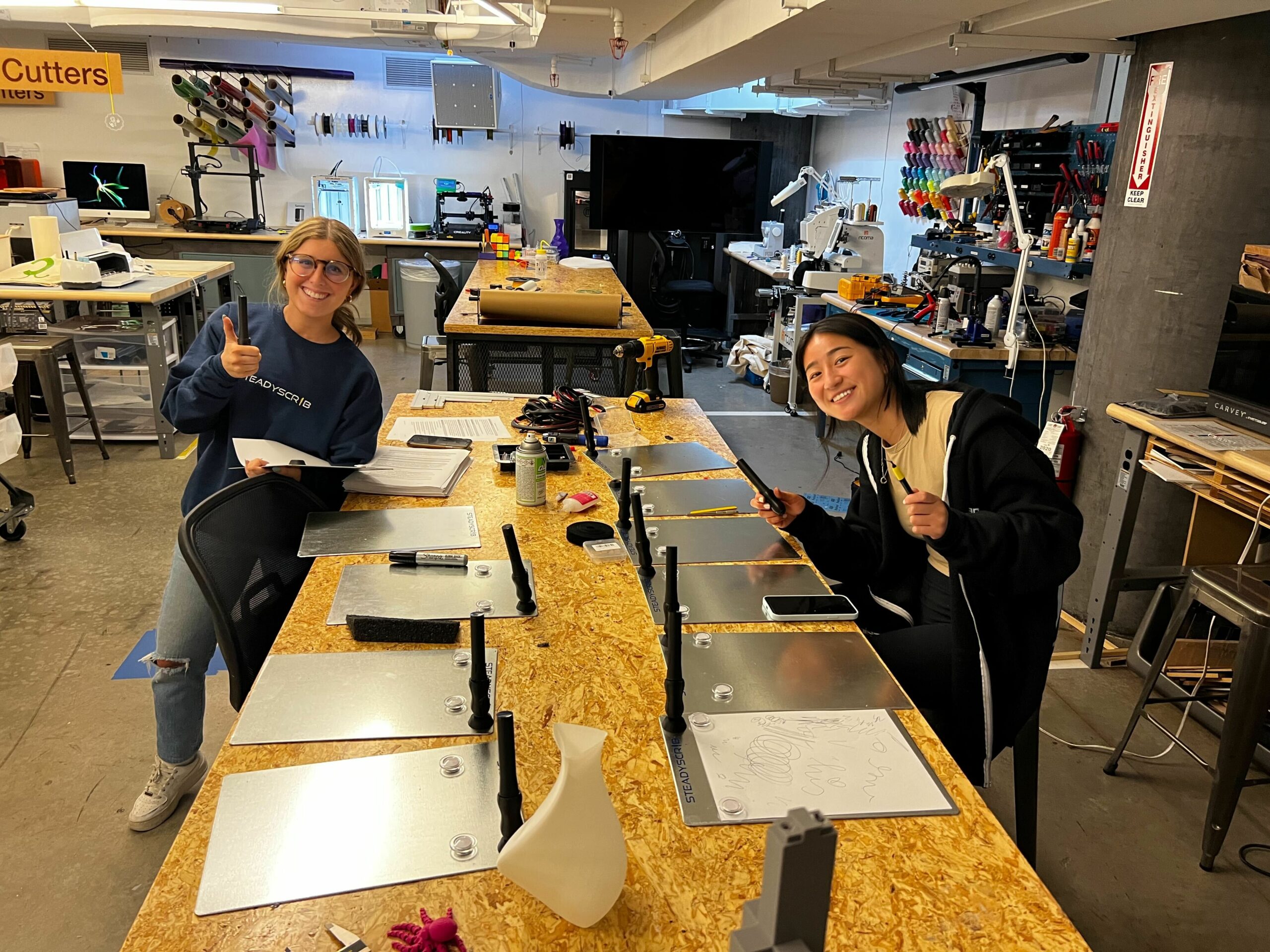 SteadyScrib is spending the summer participating in Jumpstart and creating a pen designed specifically for people with Parkinson’s disease. The team members recently sat down with The Garage to share more about their entrepreneurial journeys. Currently, the team includes Izzy Mokotoff (Medill ‘24), co-founder and CEO, co-founder and chief engineer Alexis Chan (McCormick ‘24), and an executive engineering team comprised of Briana Segal (McCormick ‘24), Priya Dave (McCormick ‘24) and Bella Gonzales-Portillo (McCormick ‘24).

What is SteadyScrib in its current form?

SteadyScrib is creating the first manual writing tool designed specifically for people with Parkinson’s disease. It is a truly unique product as any existing pen marketed toward users with Parkinson’s disease and also targets users with a myriad of other general-aging associated diseases like arthritis, Huntington’s disease, and multiple system atrophy. The existing pens are general, blanket solutions; they are not effective in counteracting the most common writing-inhibitive Parkinson’s symptoms.

We just finished our second-generation prototype and are excited to continue our design process and begin beta testing. Our pen has three unique features that make it ideal for our users. The first feature is a magnetic pen and clipboard that stabilizes movement from tremors. Next, we have a weighted grip that accelerates movement. The grip also has a curvier shape which allows for improved grip, reducing the effects of rigidity.

What is next for your company?

Currently, our team is working on a minimum viable product. We are excited to keep our same three key features while refining them more. The first-generation prototype was built from raw materials, just to see if the idea could become a reality. Now, our team is utilizing Fusion 360, a CAD modeling software, which allows us to design each aspect of our pen exactly to our needs through 3D printing. This will allow us to create a minimum viable product that we are proud to use in beta testing this summer. Currently, we are looking to partner with Chicagoland rehabilitation centers and care facilities to test our product with our target users—Parkinson’s patients themselves! Additionally, we have been awarded $18,700 funding from five grants: the Propel and Jumpstart grants from The Garage, the Davis Academy Alumni Tzedek Grant, VentureWell Stage 1 E-Teams, and the Northwestern Leadership Ventures Grant. The Propel, Jumpstart, and the Northwestern Leadership Venture programs also provide us with mentorship integral in helping our team accomplish our mission.

Could you share a bit more about your backgrounds and what led you to found/join Steady Scrib?

Izzy: SteadyScrib began as a passion project, stemming from my grandfather and his journey with Parkinson’s disease. After years of sending handwritten letters back and forth with my grandfather, our tradition was cut short because of his Parkinson’s symptoms. Because my grandfather lacks writing utensils compatible with his manual dexterity, he can no longer do so many things that he loves or needs to do to live a functional and fulfilling life, such as journaling, signing receipts, completing medical forms, and so much more. At SteadyScrib, we are personally motivated to eliminate the need for complicated and impersonal communication aids and reduce the number of times a Parkinson’s patient feels isolated, incapacitated, or inconvenienced.

Alexis: Izzy and I live in the same house and one day she knocked on my door, shared her idea, and asked for my thoughts. We then went back and forth spitballing ideas about ways to design the grip, methods to implement magnets, and contraptions we had seen in the past. A week later, she called me and asked me to join the team. Since then, we have been working very hard and it’s been so fun making SteadyScrib a reality.

Bella: One day Izzy texted me asking for engineering help. I have been involved ever since. I think our different backgrounds help make us so successful, Alexis and I are into tech and Izzy is more the lead on the entrepreneurship part.

Priya: I joined the team at the end of spring and have loved working with a leadership team composed of talented women. This team has empowered me to advocate for diversity and inclusion in the workplace. I am so proud of SteadyScrib’s successes thus far and look forward to future achievements.

Briana: The moment I learned about SteadyScrib’s mission, I was instantly inspired. As an engineer, solving meaningful problems has always been my prime motivator, so I automatically knew I wanted to contribute. With a more technical perspective, I’ve been able to contribute to the iteration process of the magnetic clipboard technology, and have been able to apply what I’ve learned in my classes to the materials selection process. I’m so excited to be able to commit more of my time this fall to see SteadyScrib come to life!

How can people get involved and learn more? Email us at steadyscrib@gmail.com or visit our website.