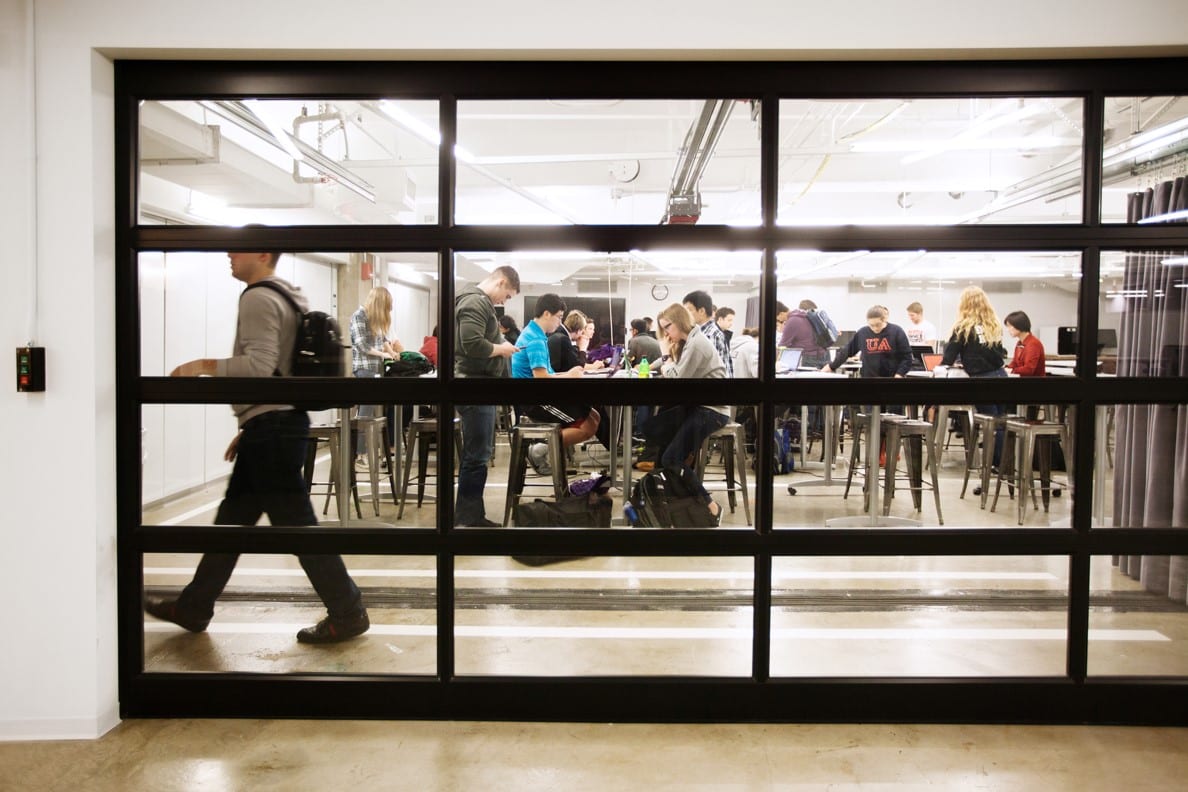 It’s no surprise that viral video challenges spread like wildfire. These challenges drive creativity and innovation as each challenger tries to create something new and unique. These challenges take many forms (for example, the cinnamon challenge, the mannequin and running man challenges, and even challenges to raise awareness like the ALS ice bucket challenge). However, there really isn’t one central social platform that hosts all of these challenges.

That’s where Mogo comes in. Mogo stands for Making Our Generation Original and it’s a video challenging social network looking to create sustainability in users doing viral video challenges. Mogo hopes to become the location that all users look to in order to find, watch, and upload video challenges. The Garage sat down with Lloyd Yates and Drew Luckenbaugh, two members of Mogo to learn more about their journey. 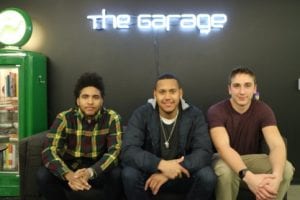 Lloyd: “I would say high school was when me and my two other founders really got into the entrepreneurial world. We tried network marketing and all that scam stuff, it didn’t work out, but nevertheless a good experience. It was good for us to dabble in entrepreneurship and figure out what we wanted to do. We kept seeing this common theme of video challenges resurfacing from middle school to high school and it’s become a huge phenomenon, that I’ve partaken in. And at the time we thought, let’s just start an app, it sounds really cool. We had no prior understanding of this area but we definitely wanted to build an app. And that’s kind of where it all came about, a passion for doing something we had seen for years and wanting to build something really cool.”

What are each of your roles on the team?

Lloyd: “So I’m kind of like the leader of the team even though we can all lead in different aspects. Drew, the tech guy, is the best in the business. We have Megell in Michigan,  who’s amazing at marketing. Currently he’s promoting our brand and building up our Instagram page and now we have thousands of followers. And there’s Shane; me and him kind of go hand-in-hand with everything we do. We’ve actually kind of made up a position for him: the Chief Visionary Officer. But I don’t think that title really does him justice in the sense that he’s a genius, especially with the vision of Mogo, where we want to take it, and understanding our users’ desires. We are definitely a solid team!”

What’s the problem you’re working to solve and what’s the solution you’ve created?

Lloyd: “I think we’re facing two problems. One, we believe there is a lack of a centralized video platform throughout social media. We conducted a survey of roughly 100 people and asked them what their favorite mobile video app is. Among those 100 people, there is no clear-cut answer. Snapchat was first, then YouTube, then Facebook, then Twitter, and finally Instagram. There was no clear winner with users saying “this is my favorite video platform.” And the second is the problem and conflict of video challenging. Like I said, it’s been going on since before our time. As long as I can remember, since I was 13 years old, people have been consistently doing viral challenges and competing with each other. Over 28 million people got involved in the ice bucket challenge in the summer of 2014 and recently over 16 million people mentioned the mannequin challenge on Instagram. So from me and my team members’ past seven years of observation, this is something that needs to be resolved. Since it’s a continuous process, it can be done better and that’s why we’re doing Mogo.”

How did you choose the name Mogo?

Lloyd: “Well, when developing the idea of the platform and tweaking things around, at one point we thought it would be cool to turn this into a game where the point of the game is to do video challenges and eventually work your way up in the system until you become a mogul. So that’s where it’s derived from and we said, Mogo, it sounds really smooth and it’s short and catchy. We also wanted it to mean something; Mogo is an acronym that stands for Making Our Generation Original.”

What has been the biggest failure and what have you learned from it?

Lloyd: “I would say, when we first got started right out of high school, we just really wanted to jump into it. We had no idea where to take things, how to build an app, and how to go about our business. We started by looking for freelance developers and we were going to pay out of pocket for their service. We got into contact with this one guy who sounded really cool and said he could do it for a reasonable price. Eventually, we started working with him, but things didn’t turn out as well as expected because for one, we didn’t know what we were doing or what we were looking for. We didn’t really see the vision or have a clear idea of Mogo at the time. And in a way, this guy played us because he knew we didn’t know what we were doing or what we wanted. He overcharged us for what he provided us. It was just a bad ordeal. But it turned out for the better; we learned we had to take things slow and do things ourselves and it was kind of a wakeup call. Now we do everything internally and it has been relatively smooth ever since.”

What has been the most important lesson you have learned so far?

Drew: “I would say with developing and everything, patience, double-checking and testing what a brand new user would be experiencing is key. You have to figure out what they would be doing as a user and become one of them. You need to think of all the different possibilities and at the same time make sure everything is  secure and good to go.”

Lloyd: “I would definitely say patience is a virtue. For starters, we really wanted to rush into things and pay somebody to build it. We didn’t really focus on the team, the product, or the users. But I think from just doing Mogo for two years now, patience is key. There’s no reason to rush into it. And another thing I’ve learned is to go ahead and just do it. There’s a lot of resources out there to tell you to create business plans and business models and 18-month runways. That’s fine and all, but I’ve read a lot of cool stuff that says creating those plans is just a prediction. You have to actually do it to figure out if it’ll actually work. Why waste your time building this elaborate plan when that plan is more than likely to fail? So just go ahead and do it and you’ll learn from trial and error.”

Drew: “Linus Torvalds, he’s the guy that invented Linux! Mainly because he’s like a big-time developer and everything but also because he competed with Windows and UNIX at the same time. He wanted a cheaper solution that he also wanted to be as open sourced as UNIX was and he just came up with his own. And now even Windows incorporated their bash shells so he practically won, because they’re using his stuff now.”

Lloyd: “I would say two people, my dad and my brother. My dad is a doctor who has recently gone into a private practice and started building his own brand and products. Seeing him go through that has been really inspiring and he has greatly helped me with my ventures as well. My brother has been working on a music startup for a few years and just having them in front of me and looking at what they’ve done is inspiring in its own way. I would also say, like big-time entrepreneur, would be the CEO of 5 Hour Energy, Manoj Bhargava. He started 5 Hour Energy and became a billionaire and he’s working on this project called Billions for Change which is a dope project. He’s really trying to change and influence the world by creating resources that will allow countries in need to have access to water and energy and I think that’s incredible.”

How has The Garage helped you with your startup and your progress?

Lloyd: “I would say I got kind of lucky when I got here because I got here the summer of 2015, right when it opened. It was cool because I had never seen anything like it. I talked to Melissa and since day one, she has been super helpful with finding the right people to talk to and growing our network. She helped me figure out and get a clear vision of Mogo along with Billy, Gregg Latterman and Neal Sales-Griffin (Mentor at The Garage). To me, The Garage has been vital in figuring out what Mogo is and where we want to be.”

Drew: “It’s a great place to come to and work on stuff to clear your mind and there are so many resources available. There are always coders everywhere so if you have any questions you can always turn to them to help you out!”

Where do you guys see Mogo going in the future?

Lloyd: “We just want to grow it to its potential. We see it being one of the next big things. In a way, people have asked us if we want to compete with the big social media platforms. And it’s like why not? We’re not trying to do what they do, they’re trying to do what we do.”

Lloyd: “My favorite is the Jukebox Challenge. It started at an HBCU  where these guys held up a speaker and played All Day by T-LO, and a group of 20 guys and girls would dance and have a good time. This really resonated with the football team. We brought that into the weight room and when someone would hit a PR (personal record) and go ring the bell, the guy who hit the PR would get a 45-LB plate and hold it up and start dancing like the jukebox challenge while more guys followed. And it just really stuck with me.”

Drew: “The cup-blowing one, mainly because I can do it. It’s the one where you have to blow one cup into another cup. That’s one of the only ones that I was good at.”

Currently Mogo is developing their mobile app which they hope to launch soon! In the meantime, check out their Instagram page @mogothat!