In the United States, a baby is born every 8 seconds leading to approximately 11,000 newborn babies every single day. That’s a lot of diapers, pacifiers, toys, baby formula and whichever hot new product is currently on the market. Parents buy these items trying to ensure a healthy upbringing for their newborn child. However, many moms often neglect one of the most important things conducive to a healthy child: their own health.

myVillage, founded by Dianna He, a student at the Kellogg School of Management, believes that in order for new parents to best take care of their newborn, they must first take care of themselves. In an era in where it takes a village to raise a family, the village is at a loss for what to do. myVillage is the only lifestyle management platform that enables healthy living through the support of friends and family for new moms (and ultimately, new parents). myVillage empowers the village to take care of new moms because that’s really the best way to help a mother out.

myVillage began in Carter Cast’s New Venture Discovery (KIEI-462-0) class originally aiming to prevent Type II diabetes for women post-pregnancy who had gestational diabetes. This idea initially hit a roadblock but Dianna and her team were able to pivot their efforts; thus, the birth of myVillage. Aside from, Dianna, myVillage is composed of 6 other Kellogg students as well as an undergraduate intern, Ziyi Lu, who will be working full-time with Dianna this summer during Wildfire. They are also currently seeking technical developers who share their same passion to join the team. 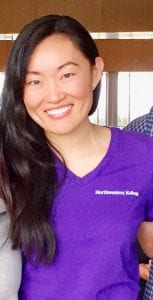 Founder of myVillage Dianna He (Not pictured: Intern, Ziyi Lu)

Dianna: “I’ve always wanted to be an entrepreneur. I feel like ever since I was little when people asked me what do you want to do when you grow up, starting my own company or being a CEO was always on that list. But in terms of why now, why Kellogg, and why business school, I was in a pretty bad car accident two years ago. I kept a journal of all my ideas since maybe 10 years ago and I’m always coming up with excuses for why not and why I shouldn’t do it. During the 8-month recovery process I was just thinking, why am I here? What am I doing? What is my purpose? And I realized the thing that gets me most excited about life and getting up in the morning is enabling and inspiring people to live healthy lifestyles. I really enjoy everything related to healthy living. We started with Carter Cast’s New Venture Discovery class in January. The pain point we were looking at originally was how to  prevent Type II diabetes because one in five people in the US will get it and 80% of those people can prevent it through lifestyle changes with a healthy diet and exercise. We talked to women who had gestational diabetes, a disease that occurs during pregnancy. It’s temporary but after pregnancy you’re at a high risk of getting Type II diabetes. We learned that there wasn’t much help for these moms so we began digging into it. We found that this could apply to all new moms so we ended up pivoting from diabetes prevention to helping new moms post-pregnancy.”

What problem is myVillage aiming to solve and what is your solution?

“During pregnancy, moms are extremely motivated to take care of their baby. So as such, there are things to help her during pregnancy. But immediately post-pregnancy, it’s basically a drop-off or a cliff, for things out there to help the new mom take better care of herself. It’s shocking the number of women who forget to eat because they’re not thinking about themselves. It’s like a switch flips in their brain and they completely forget about everything except for the baby. And that’s 100% of the people we talk to, it’s like a universal mom gene. If you think about the airplane analogy, when you’re on the airplane the flight attendant says to put on your own oxygen mask first before helping with someone else. The same exact thing applies here, in order for a new mom to best take care of her newborn, she needs to take care of herself first.

So, the solution that we want to create is a lifestyle management platform that connects new moms and her village, the people around her. It takes a village to raise a family but that village may not know what to do. When connected, her village can sign up to help with a list of pre-populated items that we provide based on what new moms need. By signing up they reduce the mom’s stress and she can focus on her holistic wellness, targeting her mental, physical, emotional, and nutritional health.”

How did you decide on the name myVillage? What was that process like?

“Good question! It was very functional in the beginning. Because in Carter Cast’s class, he would say things like that’s the diabetes team or that’s the environmental team to identify and distinguish teams. So, when we moved off diabetes we couldn’t be the diabetes team anymore. So, we were like, we’re helping a mother out so, Help a Mother Out, and that was our working title. We never intended for it to be the name of our company. As we talked to more people and conducted customer interviews, moms were like, “that’s a cool tagline, but I don’t know if I want to introduce something to someone and have them constantly use it and be reminded that they need to help me out.” So, the name actually came from our first customer. She was like, basically it’s my village, and we liked that and so we became myVillage.”

What has been the most important lesson you have learned?

“I think there’s two. Your customer is everything. Never lose sight of who they are, what they want, what they feel, what their motivations are, and what drives their needs. The reason you exist is to solve a problem that they have and to do it better than anyone else can.

The second thing is related to startups in general. At the stage we’re at now, it’s all about de-risking, the idea of looking at all the problems you’re facing and testing hypotheses to de-risk the risks you’ve identified. If you find out your hypothesis is right and it’s a good thing for you, great! You just de-risked it; you quantified it and de-risked it. If you find out your answer is bad for you, it’s all relative. Bad could mean it’s so big and insurmountable that it will cause huge problems down the line, and you’re just helping yourself now by making the decision to pivot.”

“Oprah! I grew up watching Oprah, and just her story, kindness, spirit, character, and willingness to help is very admirable. This is a bit biased too because I was once at a work dinner and she was at the restaurant and, like a fangirl, I ran over there and stood next to the table she was having dinner at. I didn’t want to be rude so I stood there until she said ‘Hi!’ And I was like ‘Hi, sorry to bother you but you’re amazing and you’re my hero.’ I was almost on the verge of tears because I couldn’t believe she was there. And she was like ‘Give me a hug! Do you want a picture?’ Total fangirl moment.”

“The Garage has been the catalyst for a lot of the stuff happening this spring and summer. I applied to Wildfire and that was going to be my indication and outside validation. I saw Wildfire and The Garage as an unbiased opinion of my idea. If they think that our team is worth investing in and we are at a stage in development worth working on full-time this summer then we’ll be a part of the Wildfire accelerator. And if they don’t, I’ll take that as an indication that it’s way too early and I need to pick up another skill or pursue something else this summer. It was a huge early validation point and from there it lit a fire to go find more team members and try to hustle even more. I can’t wait for the summer!”