Recently, over 20 cities in China have issued red alert warnings for air pollution and smog. Red alerts are the highest of the four-tiered pollution warning system used by mainland China and are a definite indication that something must be done to combat this air pollution. Chinese authorities are taking steps to fight the pollution and limit the smog, but this is still an issue that continues to plague the citizens of China. Fortunately, ORIHD aims to produce new and innovative technology to solve this problem.

ORIHD began in Northwestern’s NUVention: Energy class where Co-Founders Kuanze Ma and Edgar Palacios originally developed the idea to tackle the air pollution problem in China. ORIHD is the world’s first design of a functional and intelligent mask providing endless clean air both indoors and outdoors. The Garage sat down with both co-founders to learn more about ORIHD and their innovative mask. 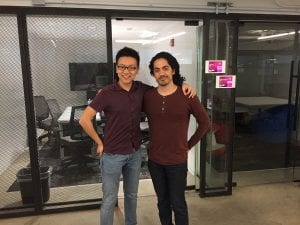 Kuanze: “Our idea started in NUVention, a course we took together during the beginning of 2016. Initially, we were required to complete a project related to energy. However, we asked whether we could do something else that wasn’t necessarily related to energy but that could still solve a big problem and our instructor was open to it. And then I thought back to my life; I was living in Beijing for four years and I suffered a lot from the smog. So, I would like to tell two stories, the first is my experience when the smog first popped up and I had no idea what it was.

It just looked like dirt in the air. I walked outside without any protection just to enjoy the comforts of the campus. But after 15 minutes, I got back to my dorm and I couldn’t go anywhere for the next two days because I kept coughing. The second story involves my roommate at the time. He was a pretty hilarious guy because he frequently opened the window during the night and I would ask him why he opened the window and he said he wanted to freshen the air… I said seriously? It definitely didn’t help freshen the air. Every time a window was open, whether it was ours or someone else’s in the hall, I couldn’t fall asleep for the next two hours because the smog and internal air pollution was so intense. So when we got to NUVention  and we had a chance to solve this; we had the technology team and myself, who has knowledge and experience with the pollution in Asia, we decided to start a technology related project to solve this problem.”

Edgar: “We initially started with a thermoelectric generator based-device because we tried really hard to make it an energy-related product, but that was a longshot. So we ended up with a really cool and simple idea which is much more feasible.”

What problem are you targeting and how do you aim to solve it?

Kuanze: “Initially the problem we were trying to solve is the outdoor air pollution and our product was a mask. But gradually, we revised our business and project model. One year after the initial stage, I realized a mask is cool but there are other problems with indoor air pollution as well and why can’t we solve both? So we changed our project model and we wanted to create a product that can protect the users from both outdoor and indoor air pollution. We changed the product from a mask to an integrated design of a mask and a portable air purifier. You can wear it as a mask when you travel outside and you can put it on a table while you’re inside as it will blow fresh air into your face. This will create a micro-ecosystem for yourself and in that way, you’re always protected!”

Edgar: “Probably that we didn’t get a designer sooner. None of us are designers. I come from an engineering background and Kuanze comes from a business and law background. And when you have a product like ours, people want to see it and that became a roadblock pretty frequently. We had an idea but we never had an actual physical or even visible representation of the product and that set us back a lot.”

Kuanze: “Yeah, I think that’s the problem as well. If we could have found someone who could really commit to this team, the whole process will be much more smooth. Although we are still developing our technology, we need the technology to go together with the design. Initially we had a friend who came onto the team as an intern and she helped create a 3D model for us but unfortunately she couldn’t remain on the team as she was applying to schools. Then I spent the next few months looking for another designer and I got to The Garage and found one during the Design Expo.”

Edgar: “I don’t think I know too many to be honest.”

Edgar: “Definitely Kuanze! But also Elon Musk is definitely one that I look up to and I consider him more of a futurist. He also just bought a solar company and he has Tesla as well. He has a bunch of different things.”

Kuanze: “For me, it’s Elon Musk as well. I admire him because he’s an explorer of so many fields like PayPal and SpaceX. And I feel like he really wants to make a change in the world, not just profit.”

Edgar: “And I think the thing I admire the most about him is that he went beyond the idea that not very many people can travel to space and he actually made it semi-affordable. I think that’s really cool because it’s outside the box and before, you’d never be able to go to space unless you were an astronaut, but now,  if you can fork up a little bit of money, you can do it.”

Kuanze: “There are so many ‘spark’ moments here in The Garage. Every time we schedule a meeting with one of our mentors, we always feel surprised and humbled by how experienced they are. They always propose so many great ideas!”

Edgar: “And the Northwestern community in general is also so helpful.”

Kuanze: “Melissa and Billy are always super willing to help. I actually just met with Insight, an industrial design group in Chicago because I was talking to Billy and I told him we were looking for an industrial design firm. The next day Melissa actually introduced us to Steve, a partner at Insight. The meeting went really well and now we might have a chance to work with this firm. Overall they have opened up a lot of opportunities for us which will definitely help us throughout the whole process.”

Edgar: “A functional prototype. The money we are receiving is great because you need money to make and develop your product which is something that we’re missing. Also, I think the fact that there will be be people here who will be pushing us is also  great because right now we’re just working at our own pace and sometimes that can be a little slow. Having someone to constantly push us will definitely keep us on track!”

Kuanze: “And if everything goes well, the next step will be crowdfunding!”