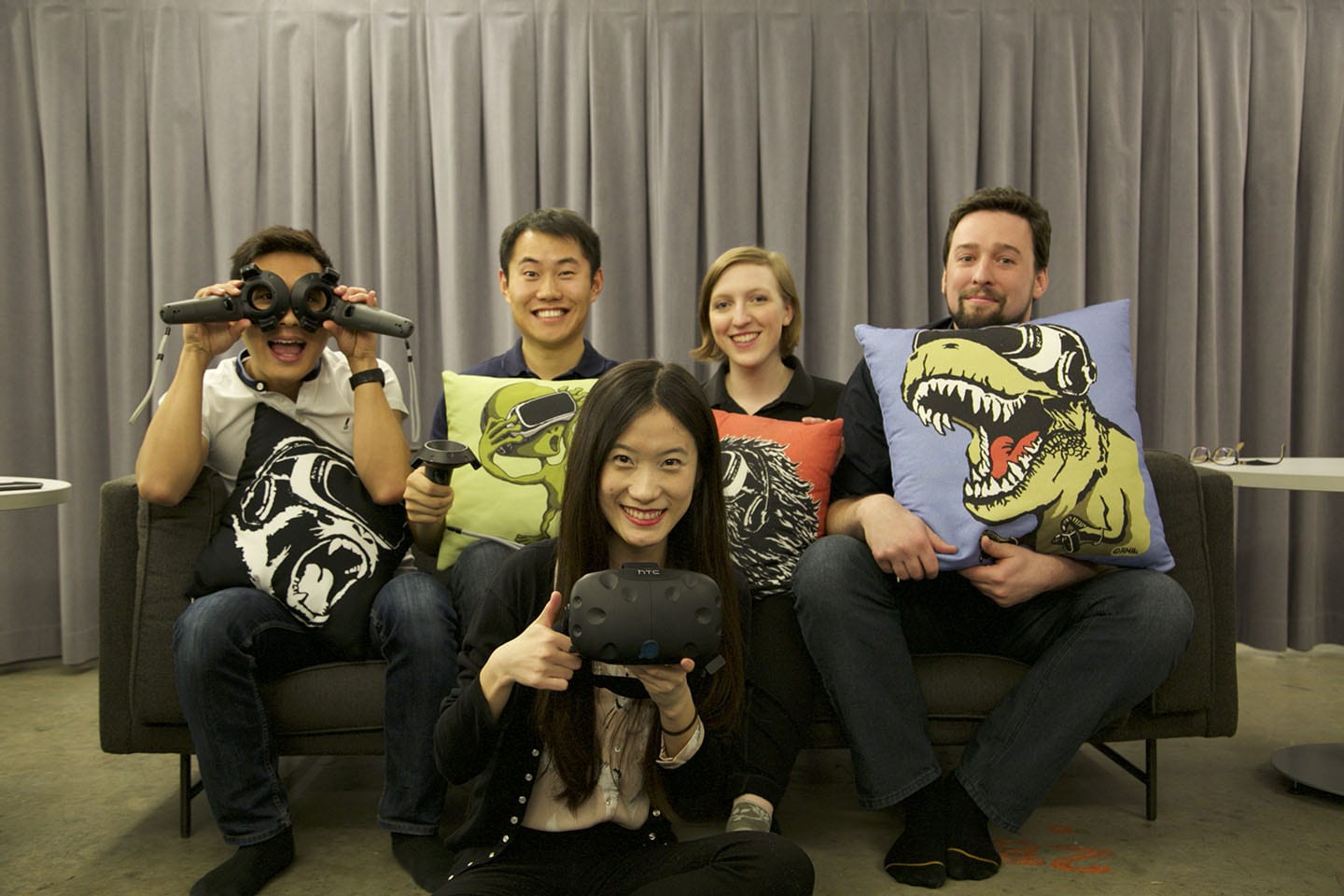 Only yesterday, virtual reality (VR) seemed like a far-off dream. But the field has grown exponentially over recent years, and it doesn’t seem like the momentum is slowing  anytime soon. VR is extremely popular for gamers as it gives them an immersive experience like none other, and it provides developers a new avenue to create innovative games. However, currently it is hard for these developers and players to show the rest of the world how great VR is since there isn’t an easy and efficient way to capture this footage.

ShareVR aims to solve this problem by connecting VR players and their experiences to social media with easy video creation and sharing integration. It’s the easiest way to show your friends what you’re up to in VR. The Garage sat down with the ShareVR team to learn more about their startup and their future goals. 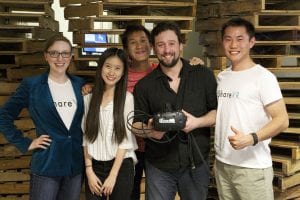 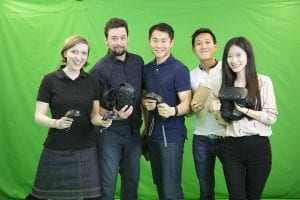 Henry Keyser: “The five of us came together as part of the NUVention class for the past 6 months. We were all interested in working in virtual reality (VR) but we didn’t know in what capacity. We initially considered a language learning application but we realized we didn’t have the manpower nor the background to succeed in that area. But we conducted a lot of interviews with VR developers to learn about what we would need to pursue a VR startup, and during that period we learned that many of them were struggling with capturing VR videos for their own marketing purposes. In addition, many VR players couldn’t effectively make videos of their own gameplay either. As a journalist who was trying to capture and show VR, I also was struggling to make these videos. When we recognized this was a recurring problem: specifically that it’s difficult to describe what it’s like being in VR without being able to properly show it, we spotted an opportunity for our startup.”

Chen Chen: “Also, in our conversations with prominent VR game developer, Steve Bowler, he demonstrated a strong need to capture and show the VR experience for his own promotional materials. He told us he wishes that he had an easier and more efficient way to capture VR videos.  And we believed that with our skillset we would be able to create an easy, and efficient way to capture VR videos. And to take it a step further, we want to extend this beyond VR developers to the players as well so that everyone can easily create and share VR videos on social media.”

Vivian Zhang: “I think another important part is our user research. That’s a big reason we chose sharing VR, because during our initial interviews with VR users, we repeatedly heard that it was hard to share VR videos because they couldn’t capture them and share them efficiently. Therefore it’s hard for them to get their friends on board to try VR as well since they can’t show them what they’re missing out on. So after all of our interviews, this problem really stood out..

Henry: “We heard Steve Bowler at an event in Chicago pretty blatantly say that there is no way to portray the VR experience to someone else without putting a headset on them. To some degree, that was kind of like ‘Challenge Accepted’. We believe that there are ways to communicate everything in life without actually being there. For example, I can explain what Rome is like without having gone to Rome. So we knew there had to be ways to show what it’s like to be in virtual reality without requiring everyone to buy a headset.”

How do you plan to solve this problem?

Eleanor Burgess: “Very simply, we help capture the virtual reality experience and share it on social media. We are focusing on action games and one of our key features is to take a third-person, drone view rather than a first-person view. We opt for a third-person view because often action games can be jerky and fast-paced whether it’s running away from zombies or fighting in a gunfight. We then encode this gameplay, captured in the third-person, as a video using an audio voice command: ‘Start recording’ and then ‘Stop recording’ to share on various social media platforms.”

Henry: “We recognized there was no way to get the perspective we wanted people to have because the first-person perspective was making people motion-sick as they watched. We wanted to have a super simple way to capture this footage in the same sense that when you take a selfie, you usually don’t have to plan it out; it’s pretty spontaneous. We also wanted it to be super easy for developers and gamers to integrate and right now it can be installed in about 40 seconds. It really doesn’t require any knowhow, I’m not a coder and I can even install it in someone’s game.  And our solution will work with any game since it’s not tethered to any single game or button, rather the voice control allows it to be universal across games by simply saying ‘Start/stop recording’.”

Eleanor: “The technological solution is twofold. On the developers’ side, they have a huge amount of grassroots marketing. We are currently building the analytics to show how many people are watching the videos and how are they performing, to provide insight and show our value to developers. On the player’s side, it allows them to start and have ongoing conversations with their friends on social media even with those who don’t have a VR headset. Ultimately we want to take VR from an isolated experience and make it something fun and interactive.”

Chen: “The videos will be in 2D, not even in 360 degrees. But this is actually really good because it makes the videos very easy to share and allows others to see what you’re doing in your VR games. We’ve seen this to be very successful as friends of VR players get to see the experience of fighting zombies or running away from dinosaurs and they end up wanting to join as well. We track these analytics and we have seen a lot of buzz created surrounding VR just by the videos being uploaded; for example just looking at Steam, we can see how many more games have been bought and downloaded after our videos went live.”

Henry: “Our product makes Youtube videos and so not only can people watch videos that others share, but there’s also a link to Steam store to purchase the game as well. This really streamlines the whole discovery process.Looking ahead at our future goals, we want to get people excited about VR and entice their friends to get involved in VR as well. We hope to support a and create a social culture in VR, Rather than you as Avatar 4 and me as Avatar 8 while in-game, we want you to be Travis and me to be Henry, looking like we do in person, so that when I see you, I see my friend. Then, we can go on crazy adventures together like climbing Mt. Everest, racing cars, or fighting hordes of zombies, and we can look back and see us in that adventure and hopefully entice our other friends to join in as well.”

Henry: “I admire the late and great Steve Jobs because he was truly a visionary even though he may have rubbed a lot of people the wrong way. I also really admire Elon Musk for being a visionary and also for being awkward and owning it. You can be awkward but if you’re smart, driven, and treat people fairly, you can do great things. And we try to treat everyone equally and fairly and not abuse the industry.”

Chen: “I’d say Bill Gates. He is my all-time favorite not only because he started Microsoft, but also because of what he has done since then. He keeps changing the world from a different perspective through foundations and assisting research. The way he utilizes resources and money is really quite educational and admirable.”

Eleanor: “For me, it’s Veronica Costa Teixeira Orvalho. I met Veronica at TechStars while I was working on a previous startup. She’s the CEO at a company called Didimo. She actually previously worked as a professor with her graduate students on the technology for really good face rendering software. But she realized this technology was her dream and she quit her job as a professor and pursued her startup full time. She is a woman of incredible grace and courage and she is a true role model for me.”

Vivian: “There’s a Chinese entrepreneur named Kai-Fu Lee and he was a senior VP of Microsoft and after that he actually went back to China and build an incubator for Chinese entrepreneurs. He has this connection with younger generations and always does many speeches at various campuses. He always encourages the younger generations to learn from different entrepreneurs and try to pursue their ideas. He provides funding and technical support as well as other resources for these individuals as well. I really admire that he is giving back and helping the younger entrepreneurs even though he is already very successful and I hope there will be more people like him in China.”