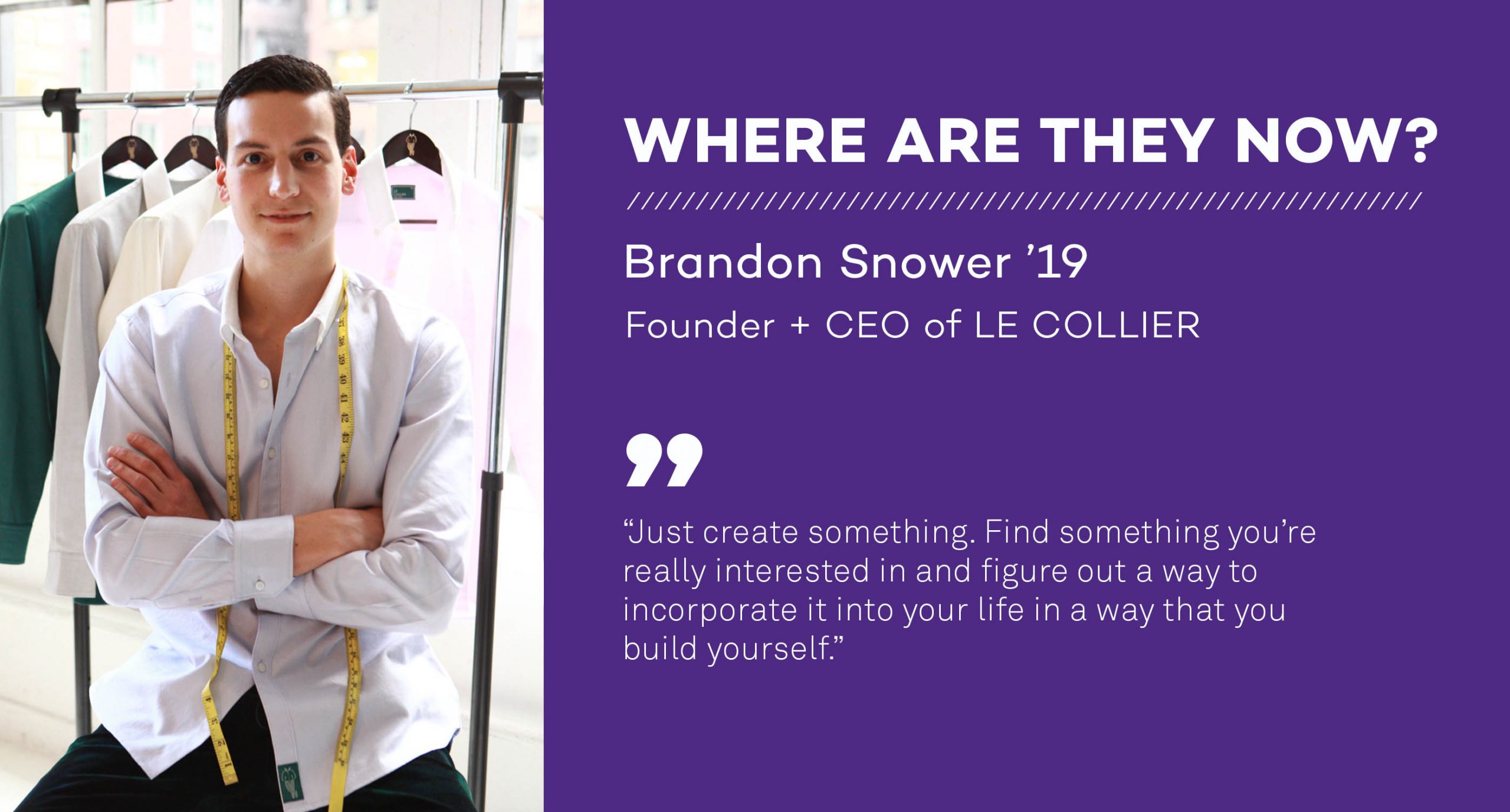 Growing up in Chicago, Brandon Snower ’19 was always surrounded by entrepreneurship. From an early age, he watched his dad start small businesses, seeing first-hand the ideas, creativity, hard work, commitment and resilience that went into starting something. In high school, Brandon developed business-savvy skills by buying and selling used TV’s, computers, iPhones, watches, furniture, and more. It was only the beginning of his entrepreneurial journey.

Brandon attended Northwestern because it was full of “competitive and driven individuals” that “genuinely wanted to become better versions of themselves both as people and as leaders.”

Joining LOUD Apparel his freshman year, a Northwestern apparel startup incubating at The Garage, Brandon quickly became the top salesperson. It was Brandon’s first venture into the apparel and startup space and it gave him the opportunity to make impactful decisions and work in creative ways to solve problems.

During his four years at Northwestern, Brandon studied Learning & Organizational Change through SESP, an area focused on human and organizational behavior; in addition to receiving a certificate from The Center for Leadership. He attributes his development and growth to Northwestern’s unique learning environment; “I think the most important skill to have is understanding people. The curriculum, extracurriculars, and culture at Northwestern gave me the opportunity to develop these essential skills that I continue to grow today.”

Northwestern also played a large role in his shift to pursue a career in finance, despite not having taken one class in this field. “I understood finance as a career for hardworking, competitive, ambitious, and intelligent people. This culture was similar to that of Northwestern, and I wanted to be a part of it.” Upon graduation, Brandon dove into finance, working in investment banking in New York City.

Brandon knew it wasn’t going to be easy. “It was a very big challenge and steep learning curve. The first day I was in a room surrounded by people who graduated from other great universities, had prior finance internships, and actually studied finance or math. But I can tell you with certainty that none of them studied Learning & Organizational Change.”

But this didn’t stop Brandon. If anything, it motivated him the same way Northwestern motivated him to learn, progress, and grow. He was the first among his peers to pass all financial licenses exams while working 12 to 15 hour days.

However after six months, Brandon found his enthusiasm and excitement for finance had waned. He reminisced of the days of flipping TV’s or working with his peers at Northwestern on creative projects.

In March of 2020, Brandon left investment banking for a new career in marketing and digital advertising. But before his first day at work, the pandemic hit.

Twenty-three years old and living in New York, Brandon found himself without a job. Brandon took this as an opportunity to learn, progress, and grow – this time in a new area without any experience.

Brandon has always found an interest in fashion. “I’ve always enjoyed being well-dressed. And I’ve always had an appreciation for nice designs and great quality. Following trends, reading magazines, and keeping up with the latest wasn’t my thing. Fashion was just something I’ve always thought I had a great eye for.”

A few months prior to leaving his investment banking career, Brandon had the idea to start a classic menswear lifestyle brand that creates a new aesthetic to today’s traditional and boring menswear which have all been around for more than 50 years. But Brandon didn’t know where to begin. “I just remember sitting in my tiny New York apartment thinking, how do I do this? Looking back at the experiences I had, the ambitious people at school who pushed me every day, and the progress I had made during both my time at Northwestern and in finance. It gave me the nudge I needed to jump in.”

And that’s exactly what Brandon did, teaching himself design, fabrics, sourcing, manufacturing, websites, marketing, and much more. Perseverance was key in overcoming the obstacles and nuances that come with starting an apparel business. “I had to become an expert in all aspects of a business. Yes, I made mistakes, but who doesn’t when starting a business. Once past the frustration, it was awesome learning from them and turning them into lessons. That’s when you see the progress.”

In February 2021, Brandon launched his New York menswear brand, LE COLLIER, selling out the entire inventory online within one week.

Today, Brandon is continuing to raise pre-seed funding in order to scale the business and reinvent the traditional and outdated menswear landscape by building a lifestyle brand that resonates with this generation of men extending beyond fashion. Because as Brandon describes it, “today’s classic menswear is as old-fashioned as his grandpa.”

We asked Brandon if he could talk to his former self, the one who had side hustles while running to class at Northwestern, what he’d say. His advice: just create something. Find something you’re really interested in and figure out a way to incorporate it into your life in a way that you build yourself and have autonomy over. If you like looking at art, then paint a painting. If you love watching sports, then start a blog. If you like running, then create a running club. You never know what that may lead to. But you will never know if you don’t take that first step.

Keep up with what’s next for Brandon’s company, LE COLLIER, and be the first one to find out about his next launch here and follow LE COLLIER on Instagram.