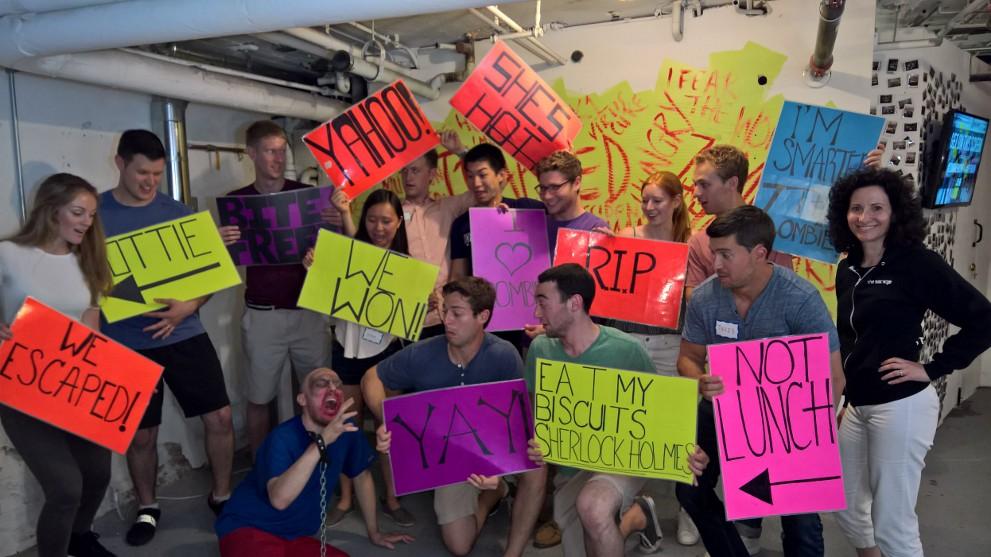 Wildfire Batch #1 kicked off on a hot Monday morning on June 20th with eleven teams of varying ages and starting points but all with one mission in mind—to build their ideas.

We kicked off the week with a brief overview of the program and our goals for the 10 weeks. First, we explained that Wildfire is more like a kitchen than a restaurant. We are not here to take your order and deliver your food but rather to give you the tools and ingredients to feed yourself and your customers. From there, we articulated the three pillars that Wildfire is built upon:

Our friends from Business Models, Inc. joined us for a full-day workshop where students learned how and why to use the Business Model Canvas and other tools to capture their assumptions about their businesses and the markets in which they have chosen to compete. The teams also presented their visions which helped form a roadmap of where they’re headed and team alignment based on a new, shared vision for the future.

In the morning, we spent time practicing our 60-second elevator pitch which helped the teams think concisely about how to convey their venture to any audience. We encouraged teams to talk less about features and what they do and more about why they do it and why we should care. In other words, we endeavored to inject some right-brain thinking into their pitches. This was followed by our first of ten workshops on Entrepreneurial Character in which we instill the qualities necessary to endure and thrive as an entrepreneur.

In the afternoon and evening, we had two rounds of Mentor Speed Dating with over 40 mentors who gave the teams nearly three hours of their time. The goal of the exercise was to provide a firehose of feedback to the teams. It ended up being the highlight of the week, and we are extremely grateful to all of the participants.

We returned to the classroom on Wednesday for a long stretch of workshops—it’s called Bootcamp Week for a reason! Business Models, Inc. returned to lead a workshop on Value Prop design in which the students had to get into the minds of their customers and think about the jobs they are trying to get done and the associated pains and gains. In the afternoon, Randy Hlavac introduced the students to a number of social monitoring tools for listening to conversations occurring all over the internet to learn what customers were actually saying and doing. Finally, Adam Goodman from the Center for Leadership led a workshop on writing your Team Charter—another exercise in achieving team alignment and getting comfortable having uncomfortable conversations.

On Thursday, we jumped on a bus and headed down to the NU Law School for an enlightening workshop on Founder Agreements with Esther Barron. Prior to the workshop, most of the teams decided on equitable splits even though we tried to explain why this was not necessarily a good idea. Esther further disabused them of this notion and some scrambling ensued as the students started to understand the importance of getting this right at the outset. You might be best friends today but what happens if… you can use your imagination to fill in the blank(s) here.

We will be revisiting Founder Agreements throughout the program using the Entrepreneurial Character workshops to build the right agreements.

In the afternoon, we trekked across the city to “Escape the Room.” We split the group in half and each team had 60 minutes to escape the room or be eaten by the zombie. In order to escape and avoid being eaten, the teams had to solve a series of clues, puzzles and riddles. One team escaped in 44 minutes and the other managed to get out in just under 52 minutes. Pretty impressive considering 70% of participants get eaten!

The final day of Bootcamp Week was pitch practice. Each team individually worked with me and Milena Palandech of Point2Pt with a focus on story, content and speaking style.

It was an exhausting week. The teams started out looking like Princess Leiea—lean, mean fighting machines, and by the end the resembled Jabba the Hut—stuffed full of ideas and insights with insufficient time to properly digest.

I was impressed with the grit and determination of the teams and the individuals in the program. They showed up, rolled up their sleeves and worked hard. Moreover, they were open to coaching and feedback which is critical when navigating the world of entrepreneurship. I am excited to see where the teams go over the next nine weeks. Stay tuned for more…