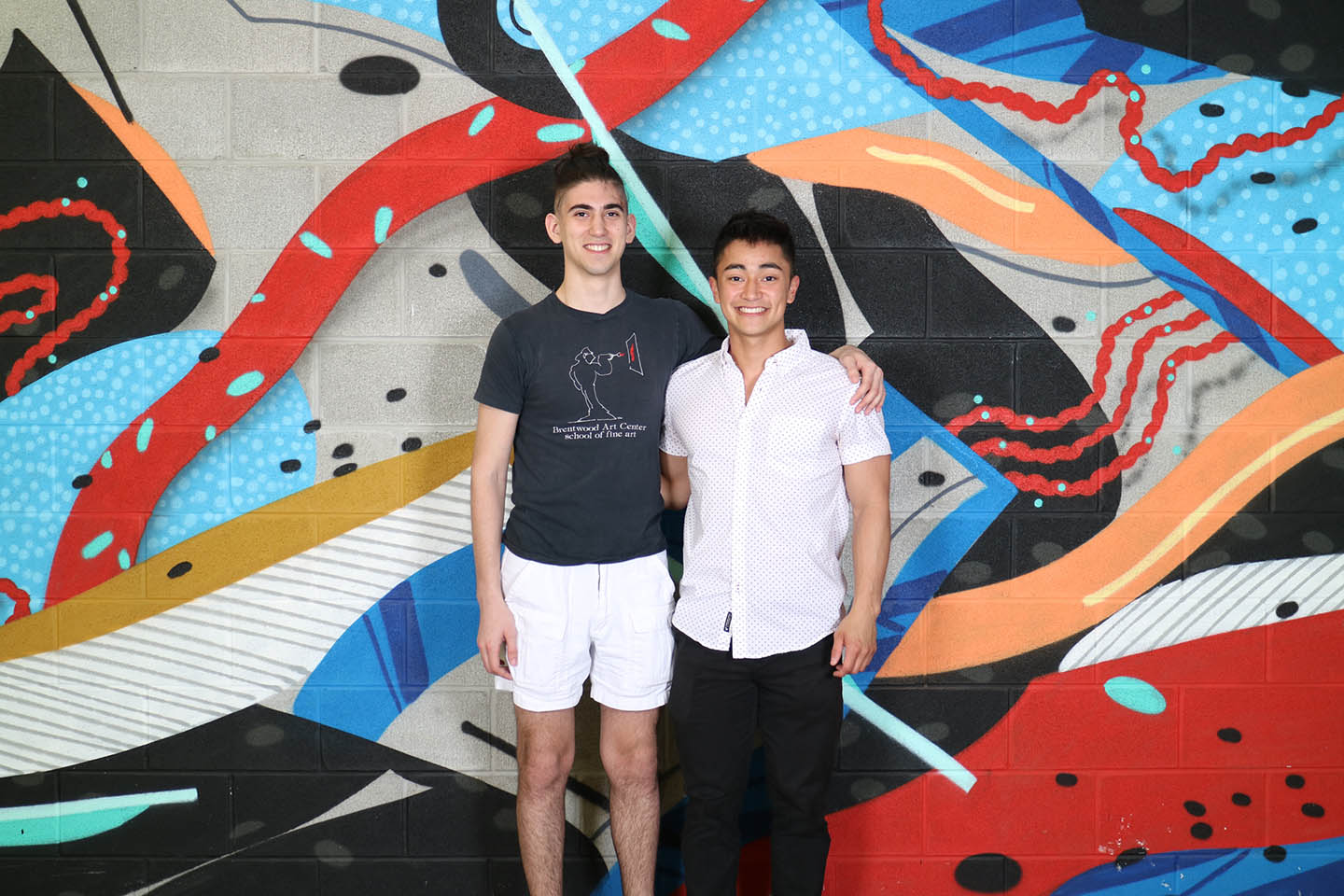 We recently sat down with Nissim Senfeld (McCormick ’21) and Brad Ramos (McCormick ’21) to learn more about the project they’re working on during Wildfire. This interview has been edited for length and clarity.

How are you guys doing today?

Nissim: We were just outside for a while

Brad: It was a nice little escape

Nissim: Funny thing about that.

Oh! Okay, that’s important. What are you guys working on, what’s up?

Brad: We pivoted pretty dramatically yesterday. Up until this week we’ve been working on something completely different. We just delivered a brand new pitch for a brand new idea. That being said, I hope our mission hasn’t changed too much. It’s just that the model we’re using and the product we’re pursuing has changed. A lot of the stuff that we’ve been doing so far doesn’t apply.

Nissim: To give you something more concrete: we’re bringing the human touch back to digital music consumption. We started out really focused on helping independent artists, but nothing we tried was really sticking. And then our new idea came up, and it was a new way that we could help independent artists. We just want to provide a platform in which one of the goals is to give independent artists a voice.

When did each of you get involved with The Garage?

Brad: Freshman year when we wanted to have a startup.

Nissim: Oh my God. I wasn’t even thinking of that. I think I’ve mentally blocked that out because it was so traumatizing.

Brad: To be fair, we didn’t get anywhere. We got nowhere.

Nissim: Basically what happened was we took an entrepreneurship class. And then we both felt very empowered to start a startup. Like “Yeah! We got so many ideas!

How do we get started? Let’s do it!” And then we went to The Garage and they were like, “all right, make appointments with all these people and talk through your ideas with them.” And we did it and by the end we had made an appointment with every single person that we could. All of our ideas got rejected.

Brad: We realized that we were in way over our heads. Our ideas weren’t actually that good or that feasible. Some of them had been done before. From there we kind of had to take a step back, but we’d definitely learned something. And then separately we sort of found our ways here. I was a Tinkerer last quarter. I have a walk-home app called Tag Along. The team wants to be here next year as well. Basically a bunch of CS people got together, we made an app for a club, realized our that the app is kind of cool and interesting. But we had no idea of marketing or testing.

Nissim: I can help with that.

Brad: Actually, like, I’ll talk to you ‘cause we need that. But yeah, our team was like “We need to make this a business, let’s take it to The Garage.” We applied and we got in and we’ve been working on that, so that was my first like direct affiliation with like The Garage and what it has to offer.

Nissim: I think after the first try, I was like, “f*ck. I’m never going to The Garage again. I exhausted all my credibility. Now everyone’s going to hate me forever.” And then in spring quarter, there was a class that I co-TA’ed for that was here in The Garage. I’ve overheard on the tours that they host classes here and that’s a major pipeline into The Garage’s programming. And it really was for me; it reintroduced me to this space. And then sophomore year, I started working here because it was really great and I had a lot of classes here. I took Neal Sales-Griffin’s class, which was awesome. Dude’s a superhero. I was always working here and then became friendly with Hayes and Melissa, I was doing AR with my friend Olivia. I was just in this space every day for a long time and that’s how I got reintroduced to The Garage. Oh. And then I got invited to apply for a Little Joe fellows. Got that through some twist of fate. Now this is like the place I feel most comfortable on campus.

That’s awesome. You two knew each other before you got involved with The Garage?

Nissim: Bradley was the second person I ever met on this campus

Brad: Yeah, like one of the first nights here, I think he was sitting with his roommate and it was still during that freshman year time where it’s like, “oh, can I sit with you guys?” And so we did. And then we ended up talking in the dining hall until it closed. The next day we meet our PA group and we’re in the same one.

Nissim: Yeah. I remember we compared our schedules the first quarter and found out that they were identical.

What are the challenges of working on a team with someone who you’re friends with?

Nissim: I just think it’s really important to take the time to be friends. It’s really easy to have co-founder relationship that kind of sucks. It’s a little bit stressful to do something like this. But with the lunch we just had or the times we hang out there’s this extra buffer before we come back and work. Making time to just be friends is important.

Brad: Yeah. I think he has a good point there because I couldn’t imagine myself strictly working all day, every day. I think we both place value in the relationship and culture that we have together. And that being said, we have pretty complementary strengths and differences.

Nissim: I also think at this point we’re really good at reading each other which is fun

Brad: Yeah. If Nissim is like wiped out. I’m like, “Hey man. Listen, let’s take five minutes and rest.”

Nissim: And I can always tell when I’ve lost you or like you’re really stressing on something. Yeah, I think it’s important for co-founders to be friends anyway.

Brad: I think if anything, it actually has helped us, rather than gotten in our way. That being said, I think it’s just because we’re both really interested in the mission of our project. Working doesn’t feel like as much work when you get to choose what you’re doing and how you’re doing it. Sometimes we don’t get to choose that. And we both struggle. But we work through it together.

What is your brainstorming process?

Nissim: Well, my superpower is spitting out terrible ideas. So sometimes Brad censors me. I’ll word vomit ideas. He’ll do the “all right, chill out.”

Brad: Yeah, I think some of Nissim’s ideas were never meant to be shared with the world. That being said, what happens is that he shares ideas and sometimes we do stumble upon something interesting. Picking through those, sometimes it’s like, “okay, how about we stop here and  expand on this and move from there for a day.” Sometimes it’s like, “okay, reset. None of that works. We need to start over.”

Nissim: But I’m aware that my ideas can also fill the room, so I will dial it back, you know? It’s just a time thing. Like, I can compress all of my thoughts into like 30 seconds and it can become overwhelming. I have to calm down!

Brad: But also I think we’ve gotten pretty good at rejecting each other to our face. Like I can say “No, actually, no.”

What has been the best part of Wildfire for you?

Brad: I came here as a CS major. All of my experience and background is in tech. But I realized that that’s not all that I want to do. And so coming here being a co-founder with a team, I was able to expose myself to a lot more than the bit of code that I’m used to staring at all day. That’s something that I’m really thankful for. And I think the mindset and the general methodology of entrepreneurship that Wildfire has thrown at me constantly has made me feel a lot more whole rather than having only my technical skills.

Nissim: Bradley’s better at self discipline than I am. Stephen (the Wildfire program manager) kind of talked about this in the beginning of the program: this is going to be secondhand fun where it’s not fun in the moment, but you look back on it and it’s like, “Oh wow, that was fun.” A lot of learning moments that happen in Wildfire I would not have been able to do on my own because I couldn’t have forced myself through it. There were literal moments where I felt like blood vessels are popping in my head and those are actually the moments that I feel like I learn the most about myself. That’s been the most valuable thing for me in Wildfire. And that’s, I think the thing I appreciate most that it’s forced me to be so far out of my comfort zone at certain points.

Do you align what you’re doing more closely with the idea of nonprofit work or with for-profit work? How do you see yourself in the whole spectrum of startups?

Nissim: We want people to have fun and happy experiences and, on the spectrum of profit to nonprofit, I don’t know if that’s relevant because we’re trying to get people more value than we take. That’s the philosophy of entrepreneurship that I’ve inherited from my teachers and my mentors. A real business is when you give people something more than you take back. That’s how you give real value to the world.