Traveling is an unparalleled way to experience new places and cultures. And to make the experience even more meaningful, it’s always nice to interact with and support local business owners. These can be local restaurants, fashion boutiques, coffee shops, museums, and so much more. It’s a great way to learn more about your destination from a genuine and knowledgeable source and as a result, this also fosters a greater economy among these local businesses. However, sometimes it may be difficult to find these businesses, especially those owned by women, which results in low engagement with these local communities.

BOSSY, a startup founded by Sam Letscher and Isabel Benatar, aims to solve this problem by connecting socially conscious travelers with local female business owners, facilitating ethical traveling and purchasing while empowering women worldwide. The idea was sparked in Mike Moyer’s Entrepreneurship 225 class and the two are currently focused on telling the story of various female business owners in Chicago to increase awareness and engagement with these local businesses. The Garage sat down with Sam and Isabel to learn more about BOSSY and their goals for the future. 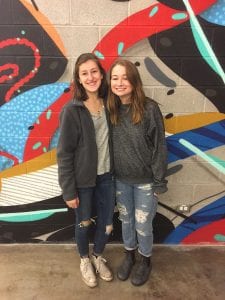 Sam: “So when we were first coming up with the concept for BOSSY, we were focused on travel. This was because Isabel had taken a gap year after high school before coming to Northwestern and I was abroad for 6 months in Madagascar and Switzerland studying public health. As we were traveling, we saw the difficulties with traveling ethically and engaging with the local community in a mutually beneficial way. We found that local businesses owned by women were the best way for us to make an impact. While traveling, we’ve both come across amazing, small women-owned businesses and we have had great experiences with them.  And right now we’re taking that concept and condensing it to Chicago and thinking about how we can be more ethical consumers rather than just travelers. For example, when we go out to a restaurant, instead of  supporting one of the big Chicago restaurant groups, how can we support local, independent businesses run by women. The focus on female ownership has really come from our dedication to women empowerment stemming from the disparities in women’s access to capital and how easy it is for people to get a business up and running, which is usually very difficult for women. Often, they’re mothers and they’ve taken a couple years off when their children were young and suddenly people don’t see them as credible or professional anymore. So there are a lot of factors in play that make it hard for women to start a business. We really wanted that to be  part of our mission because it’s something we’re both very passionate about.

How are you solving the problem you’ve identified?

Sam: “So right now we’re storytelling and we have found it so compelling to hear from women who own businesses in Chicago, especially their trials and tribulations when starting out with their own ideas. We also really enjoyed learning about their inspirations and motivations so when we step into one of these spaces, it’s a much more meaningful experience. When we sit down for a meal, we know the history of the restaurant and where the profits are going. Really understanding that background adds value to us because we are supporting someone we want to support. It’s the difference between sitting down at the Cheesecake Factory and sitting down for a home cooked meal by your grandma. We want to help people understand the history behind these local and independently run places so that when they go there it’s a more meaningful experience and simultaneously drive traffic to these locations.

How did you choose the name BOSSY, and what was the process like?

Isabel: “So we were originally calling it ‘Soar’ which we didn’t realize might be confusing if you didn’t see it written down. We both felt like we wanted to use something more powerful and we had chosen ‘Soar’ with the idea of uplifting women. We ended up brainstorming for a long time and Sam came up with BOSSY. We struggled a little bit because it does have a certain negative connotation but that’s why we liked it because it’s reclaiming that word. Also, people have a reaction to the word and it makes people curious and want to learn more about us. Ultimately, we want to encourage and celebrate women who are bosses.”

Sam: “I don’t even know if we’ve been going long enough to have a biggest failure yet. Honestly, we’ve taken so long to decide on how we want to start with this concept since it’s so broad. How do you connect socially conscious tourists with women-owned businesses to create meaningful travel experiences and support women’s economic empowerment? We decided to start with Chicago and figure out what we want to do from there. We decided to go with storytelling because that was the most interesting and compelling thing for us and we wanted to bring that content to our customers and people who will appreciate it. The hardest thing so far has been taking this broad idea and figuring out how we want to start and how we want to test it. I think that the failure was the period of being very jumbled in our thoughts and concepts and having so much going on that we couldn’t solely focus on one thing. But now we have our blog and our instagram page that we can drive people toward and we have a space to tell these stories.”

What’s the most important lesson that you have learned?

Isabel: “You have to start small. Since we started with a passion for travel, that automatically generates the question of where do we start? Do we start in a city in Mexico or take on the whole world right off the bat? So just learning that we need to start on smaller scale and more locally has allowed us to grow. “

Sam: “Personally, thinking about what we’re trying to do, I really admire the founders of Airbnb because they’ve given so many people the opportunity have another source of income. When we look at what we may eventually do in the travel space, we’re really passionate about the idea of supporting the people who actually live in a location rather than the large hotels there. So I really admire how the founders of Airbnb have been able to line up this need that travelers have with a social impact. I feel like they don’t even emphasize the fact that they are trying to support local economies. But they do and this is really inspiring because it’s such a simple idea yet it has such a big impact.”

Isabel: “I strongly agree with that and I also want to say my dad, who’s also an entrepreneur; I always bounce ideas off of him and we’re from Palo Alto so I’ve been surrounded by this culture growing up. I’ve worked with his company before and I really admire the values he brings to the organizations he works at. “

Sam: “We lived with each other last year, we were roommates, and we took the Entrepreneurship 225 class with Mike Moyer. We were working on this ‘Just add water cereal’ idea that wasn’t a very interesting product to either of us but nonetheless, still a satisfying process to go through. But I think the seed was planted there and we started thinking about the problems and opportunities in our own lives.

Basically right after this class, I went abroad for 6 months and during my time abroad I was noticing problems and how we could do them better. I had always been interested in traveling so it was a great opportunity from a personal perspective to notice these things which the 225 class really primed me to do. And when I came back, I took the 325 class with Neal Sales-Griffin and he just took the base that I had and gave me the tools to try and identify meaningful problems. I think that both of our issues in the past have been that we didn’t have anything that felt compelling enough to pursue. But once we did, it was almost a no-brainer to get together and do this because we have complementary skills and passions.”

How as The Garage helped you with your startup?

Isabel: “Honestly, the workshops like the financial modeling workshop and having a structured environment where someone is giving you this information is so helpful. Also, The Garage keeps us organized, gives us deadlines and provides networking opportunities to meet people.”

Sam: “And it’s not just the physical space that The Garage provides. It also provides a headspace for you to work in as well because you meet all these other students that have these amazing ideas which is very inspiring. Having this dedicated space creates that headspace where you’re more free to explore your ideas which is something that we all should be doing more. Overall, this really validates the student’s’ interests instead of being some alternative path and crazy side project.”

Sam: “We’re both so excited to be focusing on this full time. It’s so hard to do this throughout the year. We started a quarter ago and we’ve already made a lot of progress, but it’s hard when you don’t have the dedicated time for it. In our heads, this is a priority but there are so many other things we need to prioritize as college students. Being surrounded by people and resources who want us to succeed will be amazing. I don’t know where we’ll be and what we’ll have done by the end of the Wildfire program but I’m confident that we’re going to do something that we’re proud of and be satisfied with the work that we’re doing.”

Stay connected with BOSSY by following their blog here and their Instagram: @BOSSY_Chi!