This year, VentureCat, Northwestern’s annual student startup competition, took place on May 22, 2019 at the Kellogg Global Hub. We changed up the format this year to make sure the public Showcase is fun and fast paced, centering on what matters most: the student founders.

This year, 26 of Northwestern’s best and brightest students from across the entire university were part of VentureCat. Represented in the semifinalist lineup this year is Kellogg, SESP, Weinberg, McCormick, Medill, Pritzker, and the School of Communication. Following the closed semifinals and closed finals, where teams pitched to panels of esteemed judges (and grilled for 18 minutes of Q&A), five teams took the Showcase stage for the public. They pitched in White Auditorium to an audience of hundreds, including special guest and keynote speaker, Jon McNeill ’89. 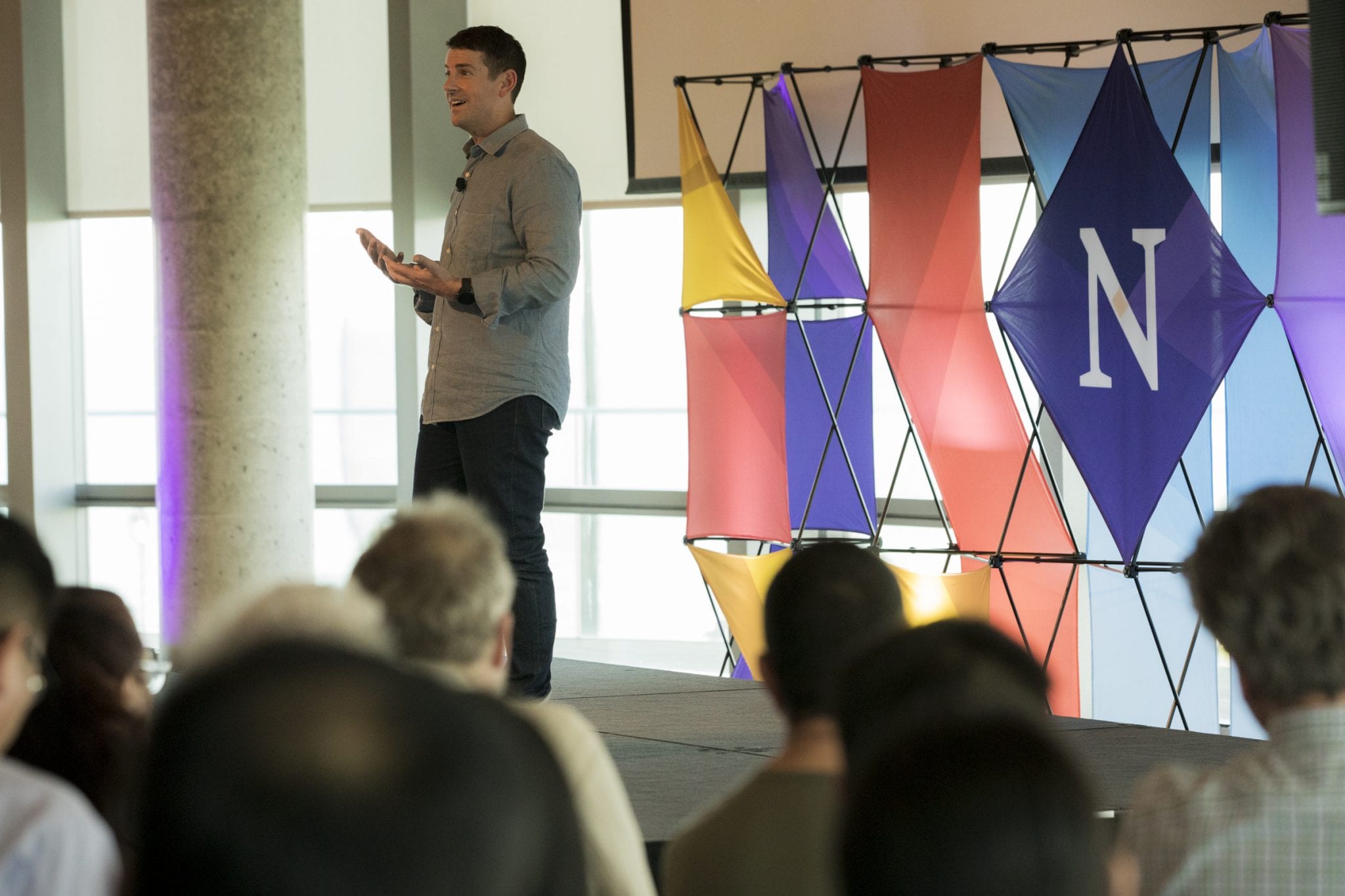 Jon McNeill’s experience as an entrepreneur earned him a reputation as both an innovator and implementer. He is the 2012 Ernst & Young Entrepreneur of the Year and in 2013 he was named “Most Admired CEO” in the midsize company category in Boston. Jon has founded eight companies, led teams creating more than 3,000 jobs and over a half-billion dollars of value for investors. He co-founded Enservio in 2006, a leading SaaS (software as a service) platform for insurers, employing over 400 people. McNeill is a graduate of Northwestern University. He was the President of Global Sales & Services at Tesla Motors before becoming the COO at Lyft in February, 2018. We were thrilled to have him as our guest of honor at VentureCat this year! During his keynote, he talked about his own discovery of entrepreneurship through a course offered during his undergraduate years at Northwestern.

VentureCat is a collaborative effort, not only in planning, but also in a diverse set of startup teams. To ensure there’s room for all types of ventures, we have five industry tracks that students startups compete within at the semifinals and finals.

The 26 semifinalist teams this year were nothing short of impressive and included members of The Garage family like PedalCell, PAL, People6, Scoots, Slate and many many more. The Kellogg School of Management was also well represented with teams like Red + Blue, Maziwa, and the dose co. turning out for the semifinals.

This year, prior to the public Showcase, finals teams pitched behind closed doors to a panel of judges, including Rob Chesney of Trunk Club, Kristi Ross of tastytrade and Sonia Nagar of Pritzker Group Venture Capital.

After a short break for the teams, the first place winner from each track took the finals stage to pitch again for a live audience. All of the pitches were polished and impressive, as they’ve been every year!

We asked the VentureCat audience who their favorite was just like we did last year. Hundreds of text votes were tallied by our team behind the scenes and Maziwa took home the audience vote prize of $2,000.

Then, we hauled out some very big checks (we mean really big!) for the top three pitches of the night. Because we had the judges deliberate prior to the public showcase, we were able to hand over cash right away! 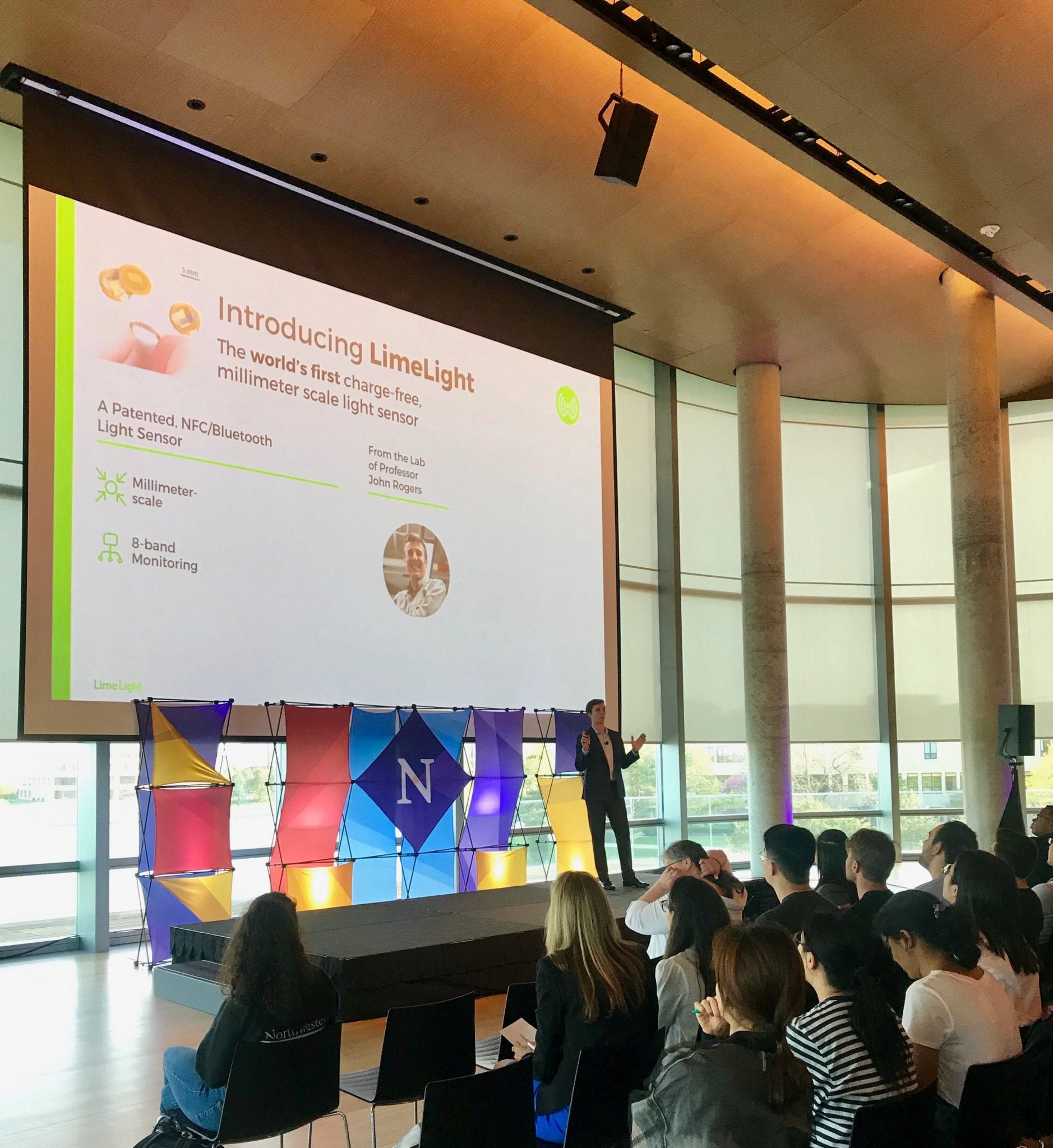 Third place, and an additional $10,000 was awarded to LimeLight, led by Phil O’Brien (Kellogg ’20), an Energy and Sustainability  startup that is advancing data to power the indoor agriculture revolution. 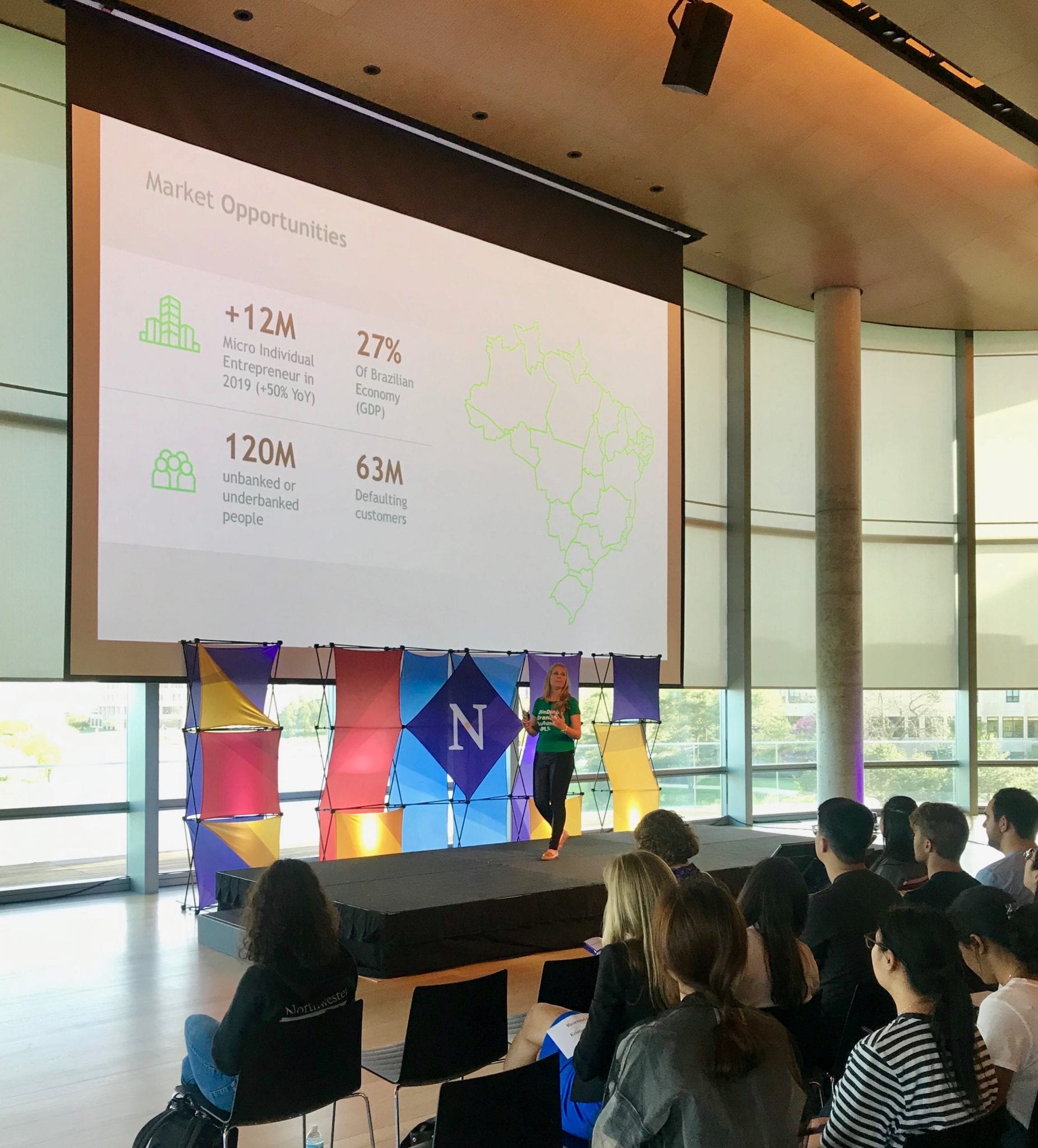 Second place, and $15,000, went to Business Products and Services competitor Dindin: Dindin is changing the access to essential financial services in Brazil by facilitating financial inclusion of the unbanked and underbanked population through its B2B2C solutions. Dindin is led by Brunna Seabra (Kellogg ’20). 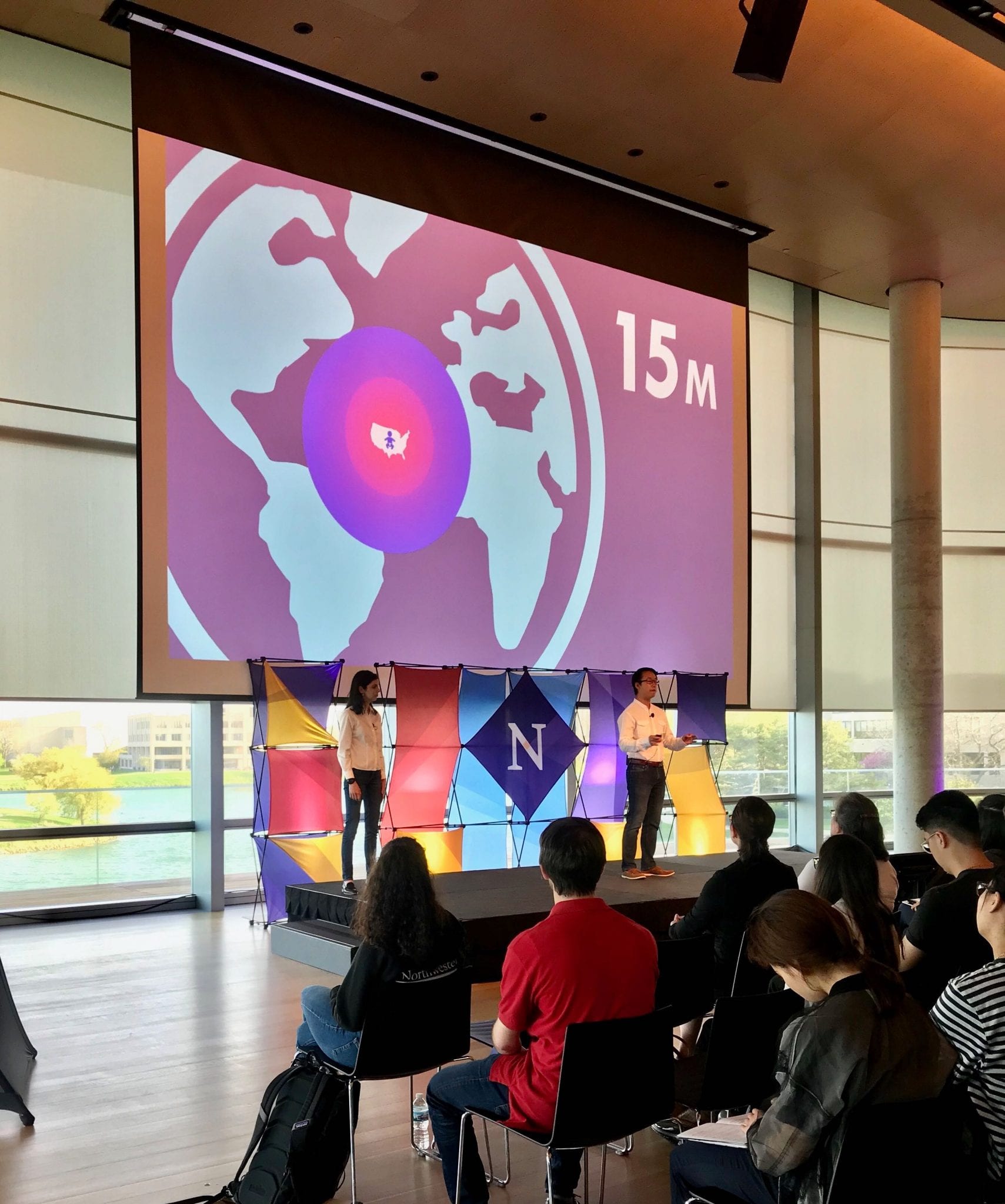 And first place, and the grand prize of $30,000 went to PreSight (previously known as HappyTears). Presight, led by Simon Yin (Kellogg ’19), is the first screening tool for retinopathy of prematurity (ROP) based on VEGF levels in the tears of premature infants. 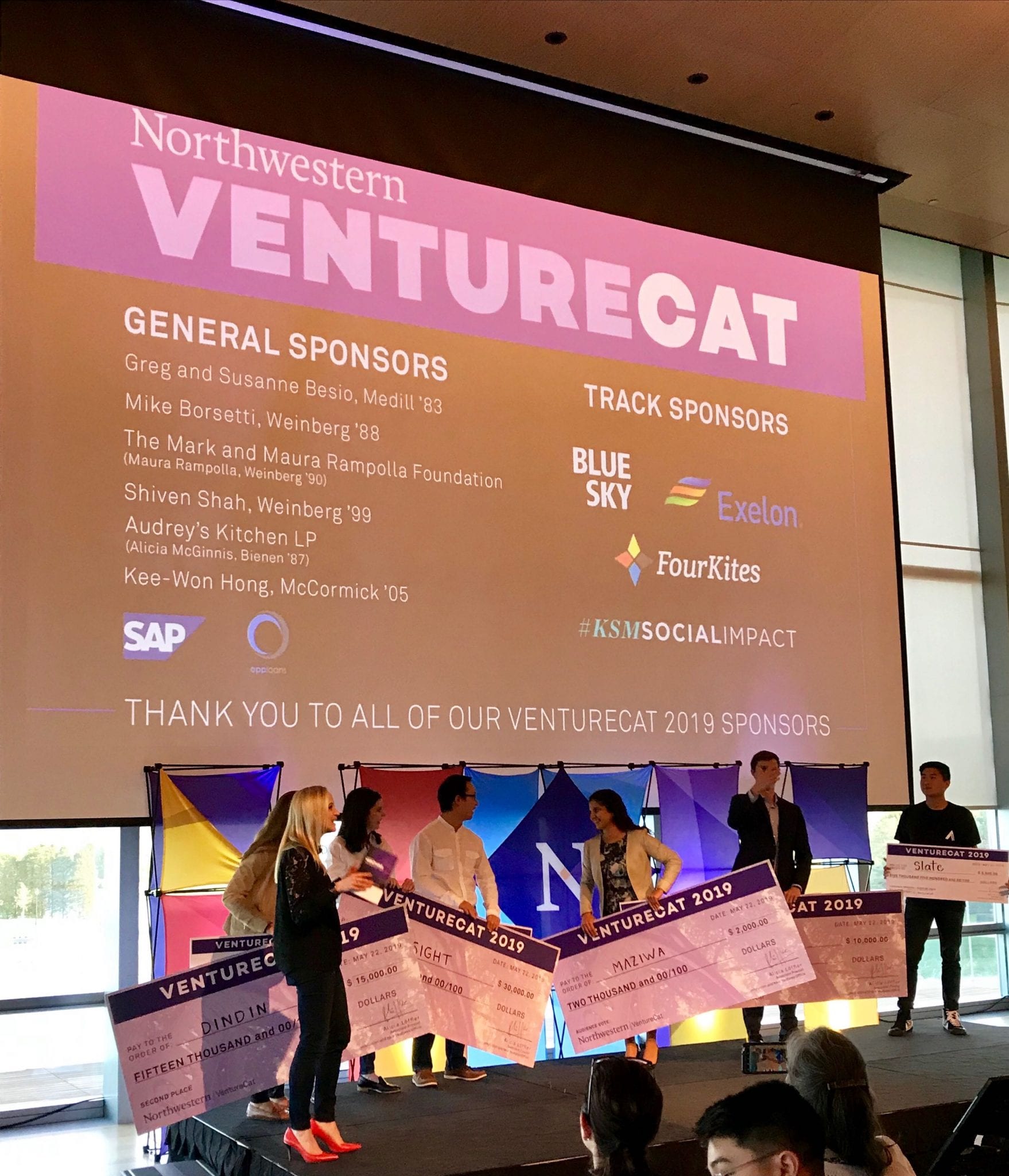 Thank you to all of the VentureCat sponsors, including both general and track sponsors. Without your help and support, we wouldn’t have the ability to help Northwestern founders turn their ideas into reality. You’re a truly vital part of the entrepreneurial ecosystem at Northwestern.And a big thank you to all of the Northwestern units that are vital in the execution and success of VentureCat every year: The Farley Center for Entrepreneurship and Innovation, The Donald Pritzker Entrepreneurship Law Center, The Kellogg School of Management, and all of your best friends here at The Garage. See you next year!