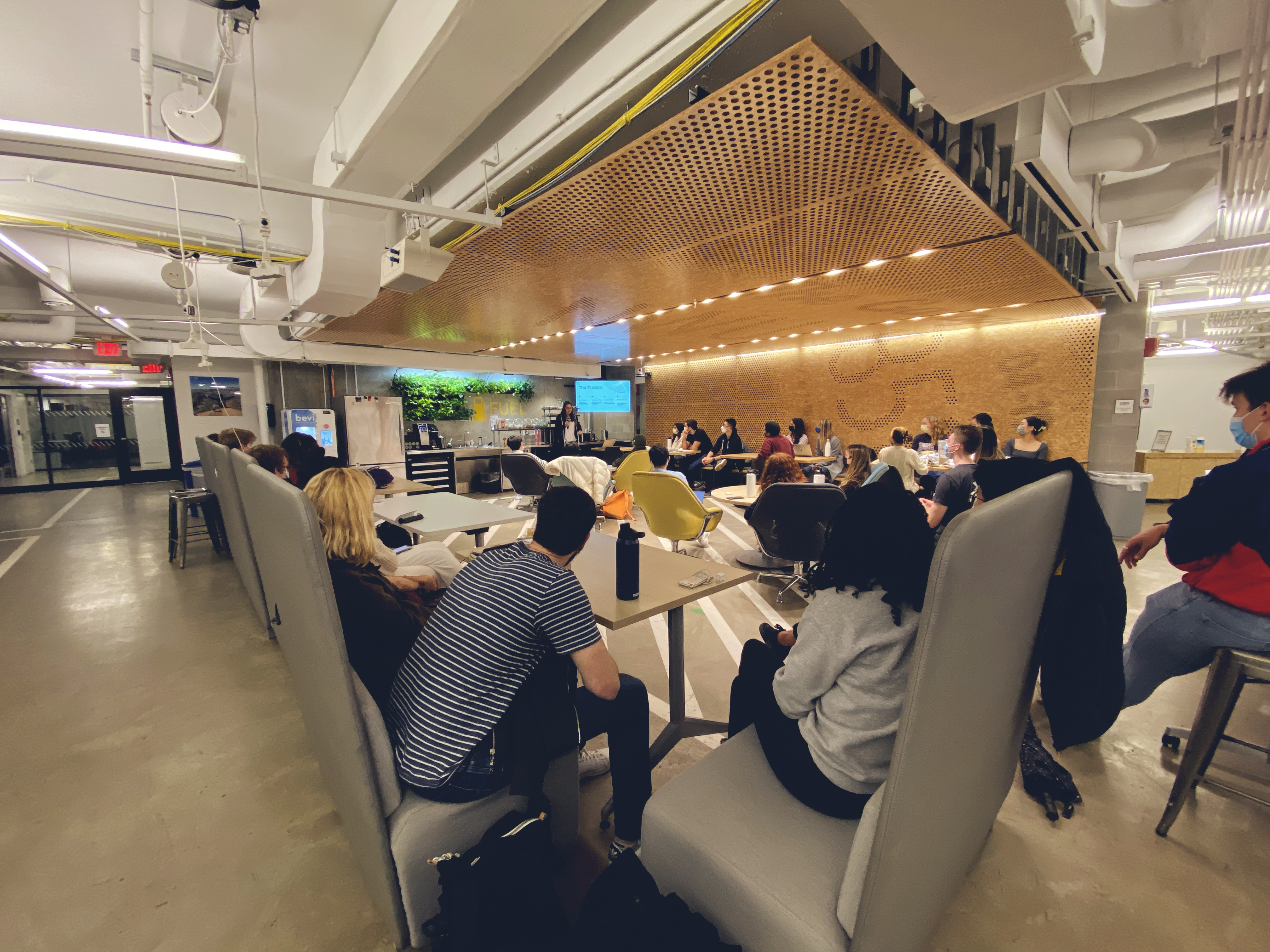 At Family Dinner on Wednesday, February 16, Residents at The Garage gathered together to hear from guest speaker Ana Cornell, the founder and CEO of Acorn Genetics. Ana is currently on a leave of absence from Northwestern (after receiving the prestigious Thiel Fellowship) and she is a founder-in-residence at The Garage. Acorn Genetics is a med-tech startup developing the first completely private, at-home genetic testing kit. Ana is excited to pursue Acorn Genetics full time. During her talk, she shared three stories with student founders at The Garage exemplifying the lessons learned on the journey of entrepreneurship.

Ana has had an interest in genetics since she was sixteen years old and her dad was diagnosed with a genetic disorder. She hoped to test herself, but quickly realized that genetic testing was incredibly costly, and there was no guarantee that results or DNA used to execute the test would be kept private. She began taking whatever online college classes she could on the subject and hoped to work in a lab to learn more about the topic. Trying to find an internship position over the summer, Ana sent 46 emails, 12 of which led to phone calls, and was unable to find a role that suited her. When looking for other opportunities, she happened to click on an IT position, even though she had no experience. “Why not?” Ana asked the group, “Why disqualify yourself before you even try?”

Ana figured she would build confidence and experience through the application and interview process, even if she didn’t land the job. When she got to the interview, she explained that she hoped to pursue genetics research and testing. It just so happened the person across the table from Ana had a brother who worked in a genetic lab at the Northwestern Feinberg School of Medicine, and just like that, Ana secured a summer position in a genetics lab.

This experience later led to her having a position at the Field Museum participating in further research. “It is like dominos that will topple over and take you where you want to go,” Ana emphasized how she would never have had that life-changing opportunity if she had not tried looking for other jobs and shared what she was truly interested in.

Next, Ana shared a story about her first venture she incubated at The Garage early in her Northwestern career: SPAPP. SPAPP was meant to be an app for SPAC, the gym at Northwestern. After building up the app, she met with two members of NU Recreation, only to learn the product already existed! Ana emphasized the importance of market research and making sure your product is something people will use before you invest too much time into it, and of course, ensuring someone else hasn’t already built it. Check out a snippet of Ana’s talk below, where she shares what happened with SPAPP.

Finally, Ana shared how Acorn Labs was an idea she had had since her freshman year that she was truly passionate about. However, everyone around her told her she would have to wait until she was older to pursue it or to go and obtain a PhD, first. She was asked on multiple occasions what made her qualified to pursue the project without more credentials. “I let those reasons stop me for a year.” Her sophomore year, Ana took an entrepreneurship class, presented the idea to her class and professor, began to build out a team, and started to tackle her dream project.

Now, Acorn Genetics has 18 employees and has raised over $175,000. “Everything I had been doing was leading up to something,” Ana shared. Following Ana’s talk, executive director of The Garage Melissa Kaufman added a few important points. First, she pointed out that entrepreneurs like Ana who have found great success in their ventures early on don’t simply have good luck: they make their own luck and they work hard. Ana didn’t need to mention her desire to work in genetics during an interview for an IT job, but she did so with excitement and passion, and that helped her to get her foot in the door in the industry. Ana has also taken advantage of the wealth of resources available to her at The Garage, including participating in multiple programs. Ana has participated in Residency, Propel, X-Factor, and Jumpstart! Now, as a Thiel Fellow, Ana will receive a stipend of $100,000 over the course of two years to pursue Acorn Genetics while taking a break from classes. Thousands apply, but just 20-30 fellows are selected annually, giving Ana access to a powerful network and the freedom to pursue her venture and get things done.

Students left the talk ready to continue tackling their own projects. After Family Dinner, Bare Mountain Tea, another startup at The Garage, had a sampling of some of their new blends of tea. Bare Mountain Tea is focused on providing local, sustainable tea that supports small businesses. Students loved having the chance to try the different flavors and provide feedback – an important stage in product development! Students: keep an eye out for different Bare Mountain Tea events coming up by following them on Instagram @bare.mountain or checking out their website.